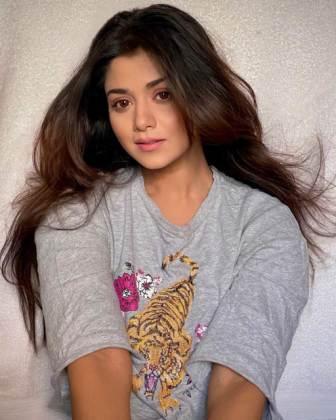 Tanvi Dogra is a young and emerging actress in the Indian television industry who is best known for her role as Falguni Purohit in the serial Jiji Maa. She was born on 31 August 1996 in Mumbai, Maharashtra. After completing her 10th standard in Mumbai, she shifted to Chandigarh due to her father’s job transfer. She was an expert in dancing during her school days.

She also used to participate in many dance competition shows of the school and also used to win, due to which she has also got many prizes. She did her graduation in engineering from a college in Chandigarh. She was also modeling during her college studies and has also walked the ramp at college festivals. After completing her engineering, she started working as an IOS app developer in a multinational company (MNC) in Pune.

She was happy in her 9 to 5 job but one day a friend of hers who works in a production house came to Tanvi with a modeling project. She did not know anything about acting at that time, so she consulted her mother about what to do. Her mother told him that there are many engineers in the world whom no one knows. But if you come on national television then people will know you.

Following the advice of her mother, she started working on that modeling project. The project helped her a lot in building her portfolio which made it easier for her to attend auditions. After some auditions, finally got a chance to debut in the television industry with the serial Meri Saasu Maa which was telecasted in the year 2016. In this serial, she got a chance to play the lead role of Babita.

In 2019, she played the lead role of Kavya Singhania in the serial Ek Bhram…Sarvagun Sampanna. Next year in 2020, Tanvi played the double role of Swati Singh and Babita in the serial Santoshi Maa – Sunayein Vrat Kathayein. Now in 2022, she is going to be seen in the lead role of Neeti in Ekta Kapoor’s serial Parineeti. Actress Aanchal Sahu will also be seen in the role of Pari with him.

Tanvi Dogra’s age is just 25 years old in the year 2022. She is an emerging young artist in the TV industry who is quite beautiful. Tanvi maintains her body well and takes a balanced diet to maintain her beauty.

Tanvi Dogra was born in an upper-middle-class Hindu family. His entire family believes in Hinduism and worships Hindu deities. Tanvi Dogra’s father’s name is Bakshish Dogra and he is an employee of the Bank of Baroda (BOB). Her mother’s name is not known but now she is not in this world. Tanvi’s mother passed away in the year 2016.

Tanvi still remembers her mother and keeps sharing pictures remembering her on social media. Apart from her father in Tanvi’s house, there is also a younger brother named Rohan Dogra. Talking about her marital status, she is still unmarried. There are reports of Tanvi’s affair with actor Dishank Arora but if she believes, Dishank is her only good friend.

Talking about Tanvi Dogra’s total net worth, her net worth is around ₹70 lakh. Her main source of earning is from acting in TV serials. She charged up to ₹50k per episode. Apart from this, she promotes many brands like Daniel Wellington on her social media pages, for which she charges thousands of rupees. She also bought a Jeep Compass Black car for himself on the occasion of Diwali in 2018. She often travels in her own car.

She is also present on Facebook where she is followed by more than 350k people. Tanvi Dogra has also been covered by Wikipedia on its page. Apart from this, she is not present on Twitter. In the table below, we have shared the links of all his social media profiles with you, by clicking on which you will be able to access his profile page directly.

Some Interesting Fact About Tanvi Dogra:

This is the latest information on Tanvi Dogra Wiki, Age, Family, Affair, Biography, Net Worth & More. Share this post with your friends and keep visiting us on celebwale.com for famous personalities and trending people’s biography with updated details. If you have any thoughts, experiences, or suggestions regarding this post or our website. you can feel free to share your thought with us.