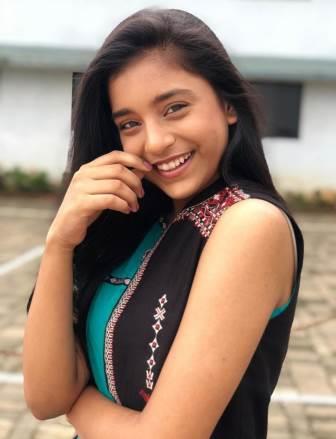 Sumbul Touqueer Khan is an Indian television actress who mainly works in Hindi TV serials and films. She is in discussions for participating in Colors TV’s popular show Bigg Boss 16 as a contestant in 2022. Sumbul was born on 15 November 2003 in Katni, Madhya Pradesh.

When she was only 6 years old, her parents got divorced. She has been with her father since the beginning. Her father is a successful choreographer in the entertainment industry who has choreographed many reality shows.

She shifted to Mumbai with her father in her childhood and got her early education from there. She completed her schooling at NTCC High School, Malad West, Mumbai. It was Sumbul Touqeer Khan’s father who inspired her to make her career as an actress in the industry.

Since her father is a choreographer, she has been a good dancer since the beginning. She along with her elder sister has participated in many plays like Ramayana and Mahabharata in Delhi. To make a career in acting, she got training from Monika Verma’s ‘Sehejmoodra Acting Academy’.

Sumbul started her television career in 2011 with the role of Subhadra in the TV serial Chandragupta Maurya. She was a part of the TV show Jodhaa Akbar from 2013 to 2015. In the year 2015, she participated in the Zee TV dance reality show DID LIL MASTERS. She was seen in the serial Waaris in 2016. In 2019, she worked in the TV serial Ishaaron Ishaaron Mein.

After that in 2020, she got a chance to play the lead role in Star Plus’ popular serial Imlie. With the role of Imlie, she became very popular among the audience. In 2022 she is a part of Colors TV’s popular reality TV show Bigg Boss 16 where she is showing the great games.

Sumbul Touqeer Khan is an Indian actor and she is 19 years old in 2023. She belongs to the state of Madhya Pradesh. She is a young beautiful actress as well as a dancer also with an attractive personality and a perfectly shaped body.

She follows a strict diet rule to keep herself fit and fine and healthy and to maintain her body figure. Her body measurement is 30-22-30.

She is one of the most beautiful dancers and actresses in the tv industry. She is a hot and gorgeous girl with an attractive personality. Her height is 1.63m or 163 cm and her body weight is around 55 Kg or 121 lbs.

Sumbul Tauqeer was born in a middle-class Muslim family in Katni, Madhya Pradesh. She believes in the religion of Islam. Sumbul Tauqeer Khan’s father’s name is Tauqir Hasan Khan and he is a choreographer in TV serials.

There is no information about her mother. However, when Sumbul was just 6 years old, his parents got divorced. Sumbul grew up and wanted to convince her father to get a second marriage, but his father did not marry another.

She also has a younger sister named Saniya Touqeer and she is also a TV actress. Their marital status is still unmarried. According to reports, Sumbul Touqeer Khan has a relationship with his boyfriend Fahmaan Khan.

Sumbul Tauqeer Khan’s total net worth is more than ₹2 crores-₹3 crores. Her earnings source is from tv series and movies. Apart from this, she is participating in Bigg Boss 16 as a contestant where she is being given a fee of ₹12 lakh every week.

My parents got divorced when I was six, though life was different yet not difficult as I loved my dad who took care of me and my sister like a father and mother, both. My father used to wake us up for school, get us ready, prepare our breakfast and then after we used to go to school he would go to work. I was very close to my mother till we were in Delhi, my father didn’t have any problems with that. But after we shifted to Mumbai, I lost touch with my mother.”

This is the full details on Sumbul Touqeer Khan Biography, Age, Height, Sister, Parents, Net Worth, Bf & More. Share this post with your friends and keep visiting us on celebwale.com for famous personalities and trending people’s biography with updated details. If you have any thoughts, experiences, or suggestions