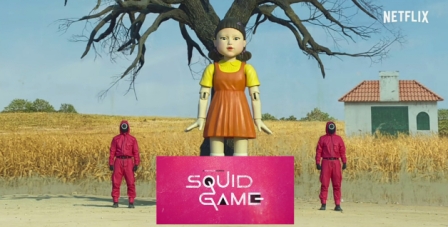 The Squid Game web series has become a global hit. This movie is directed and written by Hwang Dong-Hyuk.

There is a deadly game in the series, but along with this, the director has also introduced economic inequality, fraud through the story. Squid Game has become the most-watched show all over the world.

It is a South Korean movie that is released on September 17, 2021, this web series has become the world’s most-watched Netflix show in two weeks. After all, what is it about this children’s sports web series that the world has become addicted to it, let’s know the story by groping it.

Squid Game, a web series directed by South Korean director Hwang Dong-hyuk, shows the story of a game competition between 456 people who are in shoulder to shoulder the debt.

All these people become part of a game to get out of debt in which they have to play some children’s games. If someone wins this game, then he will get 45.6 billion South Korean won (about Rs 300 crore). But there is a big twist in the game which these people are considering as a children’s game.

The Squid Game web series has nine episodes in which there are 6 games. These games are:

In the first five games above, players cannot engage in any violent behavior with each other, in fact there is no chance, but this is not the case in Squid Game.

In this game, the player can go to any extent to win the game. A little hint has also been given about this game at the beginning of the story.

Lee Jung-Jae is in the lead role in the series. He has played the role of a driver. Lee is a divorced man who lives with his mother. She has a daughter who lives with her mother and stepfather. Lee is in debt of lakhs of rupees. So much so that he does not even have money to get his mother’s treatment.

Due to this Lee agrees to play the game. Although Lee and a few others leave the game and come back, the debt burden forces them to return to the game. Others are also trapped in the quagmire of debt.

The acting of all the actors in the series will force a moment to believe in their helplessness. Anupam Tripathi has played the role of a Pakistani worker in the series. He enters the game to fund his family’s expenses.

There is a deadly game in the series, but along with this, the director has also introduced economic inequality, fraud through the story.

Apart from this, how debt makes a person helpless and crippled. How the burden of debt scares you all the time by becoming a mental pressure can be seen in the series.

If some reports are to be believed, it took 10 years for director Hwang to stage his series. Everyone was rejecting this series citing it to be unreal. But it is said that the fruit of patience is sweet.

Something similar has been seen with Hwang. Squid Game has become the most-watched show in 90 countries so far.

There is a game in every episode of the series which is a metaphor for the experiences of life. Just as people fight to win the game, in the same way, a person has to work hard to achieve his purpose in life.

Squid Game has also tried to show issues like socio-economic inequality, gender inequality, and capitalism flourishing in Korea. Overall, Squid Game is an interesting series in which you know that there will be only one winner, but the limit of suspense will remain in it till the end.

This is the latest information on Squid Game, Story, Cast, IMDB, Review, New Release Date, Trailer, Netflix, Collection & More. Share this post with your friends and keep visiting us on celebwale.com for famous personalities and trending people’s biography with updated details. If you have any thoughts, experiences, or suggestions regarding this post or our website. you can feel free to share your thought with us.