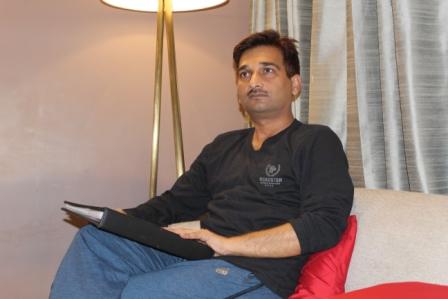 Dr. Harish Yadav is an Indian Government official. He is also a Writer, Poet, and singer. Harish also holds the membership of a maximum number of organizations across the world. He has 3 National records in the India Book of records.

Dr. Harish Yadav was born on the 1st September 1980s In Uttarakhand province in the sacred city of Rishikesh to Indian parents Azai Pal Singh Yadav and Pushpa Devi. His father was a government official and his mother was a homemaker.

Dr. Harish Yadav is an Indian Government official. He is also a Writer, Poet, and singer. He is known for composing semi-classical songs. Harish also holds the membership of a maximum number of organizations across the world.

He has 3 National records in the India Book of records. His song Khadi Geet is very popular song. Poet and writer Dr. Harish Yadav was born in a well-to-do conservative Hindu family.

And from a very short age, he was interested in poetry, acting, and singing. At an early age, he started writing poems and stories. His first published book is Yugdristha (Hindi-Poems). He also writes Urdu poems. He knows several languages.

His various books published-Garden of Bliss (Poetry), Kham-e -Misga (Urdu Shayari). One of his book titled ‘I’ has the record of smallest title book in India book of records. His love in poetry inspired him to write poems. In his book Kham-e- Misga, there are various romantic poems that touched the heart.

Harish is an actor also. He also played a supporting role in the film Van-Rakshak. He also loves to act in the Music and played a role in a music album-Tujhe Pyar Karte Karte. He loves photography and paintings. He also plays guitar in his free time.

Dr Harish was appointed as Resource Person of SEBI in 2012. He was a Special Officer in Wildlife Crime control Bureau of India, Govt of India. He worked on various posts and performed excellent achievements.

At present time he is officer in Central civil services, Govt of India. Dr Harish has represented India at various International; conferences on sustainable development and youth empowerment. He played key role in UNESCO. He performed the role of Judge in Royal Commonwealth society, London.

Dr Harish has led various social campaigns in India and across the world such as -Save water campaign, save our River and Gram Utkarsh. He worked for empowerment of youths. He got implemented to make database of all dry rivers and Pond in India.

Dr. Harish has also performed as singer and lyricist in Khadi Geet Album (2019) which depicts the importance of handwoven cloths.

Harish Yadav’s height is 5 feet 8 inches, which is equal to 168 centimeters. His body weight is about 67 kg. His body measurement is 44-34-14. His eye color is Black, and his hair color is also Black.

Harish was born in Hindu Family. His father name is Ajai pal Singh Yadav, who is a retired Officer from IDPL, Virbhadra, Rishikesh. His father had to struggle for education. His father of high moral values.

Talking about Harish’s marital status, he is married and his wife name is Prateeksha. There is no details about his childrens.

There is no detail about his income and net worth.

The account of Harish Yadav is present on all social media platforms where he shares his project related photos, and video with his followers. Harish is present on Instagram where he followed by 143 people and the number of his post is about 18.

He is also present on Facebook where they followed by more than 5K people. Harish has not been covered by Wikipedia yet on his page. His account is also available on Twitter, where he expresses his thoughts through tweet with his 800 followers.

In the table below, we have shared the links to all of their social media profiles, by clicking, you will be able to access their profile page.

Dr harish Yadav belongs to Gunnur, Sambhal. He got his early schooling from Rishikesh. He completed his High school from KV IDPL Rishikesh and Intermediate from IDPL Inter College. He received his graduation and M.A. from Government PG College, Rishikesh. He obtained M.Phil. from Sai Nath University. He has been awarded by D.Litt. also. He knows several languages.

This is the full details on Dr. Harish Yadav Biography, Wiki, Age, Height, Family, Poem, Education & More. Share this post with your friends and keep visiting us on celebwale.com for famous personalities and trending people’s biography with updated details. If you have any thoughts, experiences, or suggestions regarding this post or our website. you can feel free to share your thought with us.