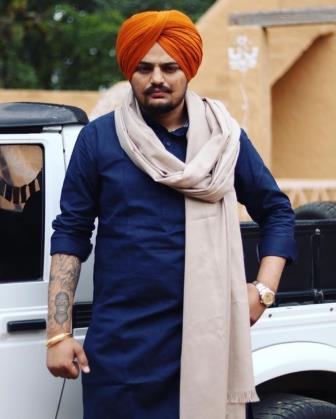 Sidhu Moose Wala was an Indian Singer, Rapper, Actor, and Politician who has worked predominantly in the Punjabi music industry. He was born on 11 June 1993 in Musa village of Mansa, Punjab. Moosewala’s full name was Subhdeep Singh Sidhu.

He had his early education in the Mansa district. He joined Guru Nanak Dev Engineering College, Ludhiana for higher education. From there he obtained his B.Tech degree in Electrical Engineering in 2016. Moose Wala was influenced by rapper Tupac Shakur since childhood.

He started taking interest in hip-hop music in the sixth grade and later learned musical skills from Harvinder Bittu in Ludhiana. After completing his graduation he shifted to Brampton, Ontario, Canada. He started his career as a lyrics writer for the famous song ‘License’. The song was sung by Ninja.

Sidhu Moose Wala started his career as a singer with ‘Zee Vegan’. After this, he worked on several tracks with Brown Boys. He also did many live shows in Canada. In 2018 he came back to India and started working in Punjabi Music Industry.

He earned worldwide success with his track ‘So High’. He later released his debut album ‘PBX 1′, which peaked at number 66 on the Billboard Canadian Albums Chart. After the success of the album, he began releasing his own songs independently. His single ’47’ also made it to the UK Singles Chart.

In the year 2020, Sidhu was named among the 50 new artists by The Guardian. He made his debut in Punjabi cinema with the film Yes I am Student produced by his production company Jatt Life Studios. He was seen in films like Teri Meri Jodi in 2019 and Gunah in 2020. He has appeared in Punjabi films like Moosa Jatt, and Jattan Da Munda Gaun Lagya.

Sidhu Moose Wala joined the Congress party on 3 December 2021 in the presence of Chief Minister Charanjit Singh Channi and Congress state unit president Navjot Singh Sidhu. He contested the upcoming assembly elections from his hometown Mansa but was defeated by an AAP candidate. He was an active leader of the Congress party.

The case was registered after pictures showing AK-47 rifles firing at the firing range during the Covid lockdown went viral. In this song, Sidhu Moose Wala was seen bragging about the cases going on against him. Sidhu Moosewala had a rivalry with Karan Aujla. Both of them responded to each other many times through their songs, social media handles, and live performances.

Congress leader and Punjabi singer Sidhu Moosewala was shot dead on 29 May 2022 in Mansa district. Three others were injured in the firing. The attack took place when Moosewala and his two friends were on their way to their village Mansa in Punjab.

Bullets were fired on Moose Wala’s Mahindra SUV. He was seen bleeding in the car. He was taken to the hospital where doctors declared him brought dead. Three people injured in the firing have been admitted to Mansa Hospital. The incident happened just a day after the Punjab government withdrew the security of 424 people, including Moose Wala.

Sidhu Moose Wala passed away just at the age of 28 Years. Talking about the physical appearance of his body, Sidhu’s height was 6 feet 1 inch, which is 185 cm. His body weight is 85 kg which is equal to 187 lbs. His eye color was black and his hair color was also black.

Moose Wala was born in a middle-class Sikh family in Mansa, Punjab district. His entire family believes in Sikhism and also worships the Sikh Guru. Moose Wala’s father’s name is Bhola Singh and his mother Charan Kaur is the village headman. Sidhu also has a brother named Gurpreet Sidhu and his marital status was still unmarried.

Talking about the total net worth of Sidhu Moose Wala, his net worth was around ₹31 crores in total. He was a well-known artist in Punjabi Singing Industry. Almost all the songs sang by him were hits. His main source of income was TV shows, films, and live concerts.

He also has more than 10 million subscribers on YouTube, where he used to earn big by uploading videos. He was one of the highest-paid Punjabi singers in the music industry. Sidhu’s one-month income was around ₹35 lakhs. He used to charge around ₹ 6 lakh to ₹ 8 lakh for a song. Apart from this, he used to charge up to ₹ 20 lakh for live shows. He also used to earn a lot by promoting many brands.

His net worth was increasing continuously for the last few years. He loved to live a luxurious lifestyle. He had a luxurious house located in Brampton, Canada. Apart from this, recently he had also built a luxurious bungalow in Mansa, Punjab in which his family lives.

Disclaimer: All images are available on the Sidhu Moose Wala Official Instagram Account. Images can be taken from his official Instagram account for educational purposes. Image Credit goes to the respective owners of the Image Creator. We try to gather accurate data but sometimes there might be some mistakes, Kindly let us know if you find mistakes, and We would correct them. We do not take any Guarantee/Claim That the information we have gathered is 100% correct.

This is the full details on Sidhu Moose Wala Biography, Age, Height, Death, Father, Family, Wife, Brother, Net Worth & More. Please share this post with your friends and visit us on celebwale.com for famous personalities and trending people’s biographies with updated details. If you have any thoughts, experiences, or suggestions regarding this post or our website. you can feel free to share your thought with us.