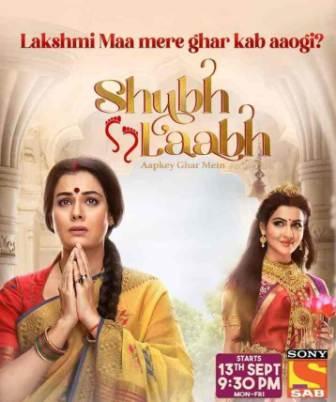 Shubh Laabh is a new serial aired on SAB TV and produced by Jay Mehta. The serial is produced under the banner of Jai Production and will be aired on SAB TV from Monday to Friday at 9:30 pm.

This serial will replace the SAB TV serial Tera Yaar Hoon Main. The promo of the show was released on 20 August by SAB TV on all social media sites and YouTube.

In which the audience got to see a family story. This serial is mainly based on a family story in which a family is going through a severe financial crisis.

In that family, the daughter-in-law of the house is a devotee of Lakshmi and she often worships her. She has full faith that Mata Rani (Goddess Laxmi) will definitely bless him one day.

The promo of the show is very beautiful which is being liked a lot by the audience. Talking about the star cast of the serial, Chhavi Pandey, Geetanjali Tikekar and Manan Joshi will be seen playing the lead roles.

Apart from these, we have covered all the characters with photos through the table which is given below which you must read once.

This is the full details on Shubh Laabh Serial Cast With Photo, SAB TV, Timing, Cast 2021, Image, Release Date, Telecast Timing, Repeat Timing, Story & More. Share this post with your friends and keep visiting us on celebwale.com for such an entertaining post. If you have any thoughts, experiences, or suggestions regarding this post or our website. you can feel free to share your thought with us.