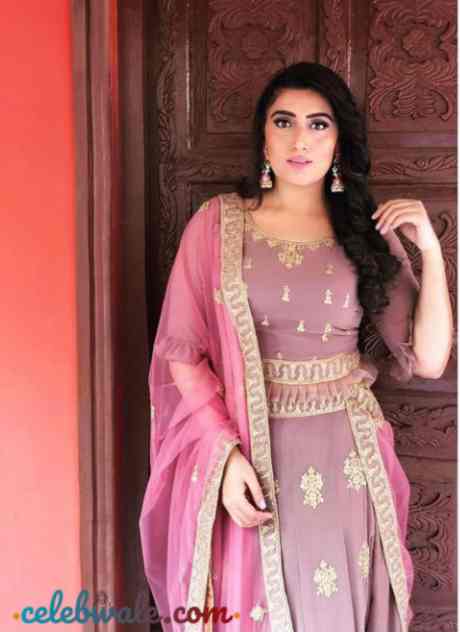 Shireen Mirza was born on 02 August 1988 in Jaipur, Rajasthan, India, she was attracted to acting since childhood. After completing her initial studies at a private school, Shireen graduated and got post-graduation degrees in Jaipur itself. Shireen Mirza has been doing theater since her school time, she has done a lot of plays at Jawahar Kala Kendra.

Shireen participated in a beauty contest for the Miss Jaipur title in 2008. She later participated in a competition for Miss Rajasthan Sundari, where she won the titles Miss Personality and Miss Beautiful Hair. She later won another Miss Fashion India title in 2009. Shireen came to Mumbai in 2010 to dream of becoming an actress, and she was lucky to get her first role in the Hollywood film Not Today without struggling.

The film was a crime thriller film based on Human Trafficking in India and Shireen played a negative role in the film and was praised for her role in the film. However, after this film, Shireen did not get a good role due to her height because her height did not match her role. This frustrated and upset her and her father fully supported her at that time, and never let her give up.

Her patience eventually paid off and she received a call from Manish Gupta’s production house. She then starred in the film Main Nahi Anna alongside director Prashant Narayan.

After some struggle in Mumbai, she got a chance to participate in the MTV show MTV Girls Nightout in 2010 as a participant. After that, Shireen makes her debut as an actress in 2011 when she worked in the serial Anhoniyo Ka Andhera. This serial earned him some fame in the TV industry and she started getting work in the industry.

The same year Shireen hosted the reality show Aapka Sapna Hamara Apna with actor Ali Asgar. Apart from this, Shireen has worked in serials like Yeh Kaha Aa Gaye Hum, Gutur Gu, Dhai Kilo Prem, Savdhaan India, and Yeh Hai Aashiqui. Where she got the most popularity from the Star Plus serial Yeh Hain Mohabbatein.

In this serial, she played the role of Simran Simmi Bhalla Khurana, which got a lot of love from the audience and she made her place in the audience with her tremendous acting. The serial Yeh Hain Mohabbatein was aired on Star Plus from 2013 to 2019. The serial was telecast on television for 6 years, during which Shireen’s work gained a new identity.

Shireen Mirza is one of the most beautiful actresses in the Indian television world, who has made her mark in the TV field with her strong acting in many serials. She is a beautiful and attractive woman, whose beauty has spread her beauty in the TV serial. Shireen worked in the TV sector as well as in Bollywood and Hollywood movies also.

She made her debut in the Bollywood film Vartamaan with Sameer Dharmadhikari and Rajesh Shringarpure. Later she also acted in Bollywood films like Main Nahin Anna, and Love Training. She made her Hollywood debut with the film Not Today, in this movie Shirin played a negative character named Brothel Mistress.

Shireen has a lot of interest in cricket, so she has also participated in the sports entertainment show Box Cricket League (BCL). Talking about Shireen Mirza’s love life, she is quite open about her personal life. Recently Shireen Mirza reported the engagement by sharing a picture with her boyfriend Hassan Sartaj.

Let me tell you that Shireen Mirza was dating her boyfriend Hassan Sartaj for a long time. Now on the occasion of Valentine’s Day, his boyfriend proposed for the wedding, which she accepted very fondly.

Shireen Mirza’s age is 33 years old in 2022, she is a very beautiful actress in the TV industry who belongs to Rajasthan. She is one of the most beautiful actresses in the tv industry who has very attractive figures and perfect looks. She takes nappy food to make her body fit and beautiful. She visits the gym regularly to maintain her body measurement.

Talking about the physical appearance of her body, Shireen’s height is 5 feet 3 inches, which is 162 cm. Her body weight is 55 kg and Kristina’s body measurement is 32-26-34. Her eye color is dark brown and her hair color is Black.

Shireen Mirza was born into a well-settled Muslim family, she believes in Islam and respects all the religions and cultures. Shireen Mirza’s father’s name is not known, and her mother’s name is Nelofar Mirza. Shireen has an elder brother also named Shahbaz Mirza who is a Director at MIB Builders and Colonizer Pvt. Ltd and her sister’s name is Not Available.

Shireen Mirza shared a picture on her social media with her boyfriend in which Hassan is seen propping up Shireen on his knee while Shireen is giving a shocking expression. It is being told that as soon as Shireen said yes, Hassan gave him the ring. Both wore a black dress on this occasion. Let me tell you that Shireen and Hassan had been dating each other for a long time and on this Valentine’s Day.

Hassan proposed Shireen to at the wedding which Shireen accepted, now both are soon to be engaged, And then get married. Finally, they got married on 23 October 2021. Shireen’s boyfriend Hassan Sartaj hails from Delhi and works in an IT company. Shireen Mirza’s Husband’s name is Hassan Sartaj.

Shireen Mirza’s birthplace is Jaipur, which is the capital city of Rajasthan, and she grew up there. Shireen’s early education was at a local private school in Jaipur. She completed her Highschool and Intermediate education in Jaipur. She has also completed her graduation in a Bachelor of English and post-graduation degree in Masters of Business Administration (MBA) from Maharani College, Jaipur, Rajasthan.

Shireen shares her story of a school in an Interview She said that I’ve done my schooling at Saint Edmund’s School, “I failed in General Knowledge in class 5th, and out of embarrassment, I changed my school.

In my other school, I was teased because of my height; I was 5’5″ tall when I was in class 6th. My turning point came after I joined a theatre workshop in Jawahar Kala Kendra in class 9th. It helped me open up.

I still remember the first day when I was asked to give my introduction, I started crying. After a few months of attending the workshop I gained a lot of confidence: In fact, I ended up playing the protagonist in my first play.”

Shireen Mirza’s favorite things to talk about are her favorite actors Shah Rukh Khan and Amitabh Bachchan, whose movies she loves to watch and her favorite actresses are Kajol, Sridevi, and Madhuri Dixit. She is a non-vegetarian who likes to eat biryani, and butter chicken. Pink, Black, & White is some of her favorite colors.

She is also very fond of traveling, she often shares her vacation pictures on her social media. They like to go to Goa, London, Dubai, and Maldives. Below we have given their favorite things in the list table, you must check once.

The net worth and salary of Shireen Mirza are 50k to 70k per episode. She has total net worth of ₹3 crores.

Shireen Mirza’s account is on Facebook, Twitter, and Instagram, and she is popular on Instagram where she shares her latest photos, videos and travel photos, photos of shoots, etc. with her fans. She is very beautiful in appearance, her popularity is increasing on social media, she is also present on Twitter. Below we are giving you the link to all their social media accounts, on which you can click and directly connect to their account.

More than 545k followers are available on Shireen’s Instagram account and more than 24k people follow her on Facebook. Shireen Mirza has been covered by Wikipedia, below we have given the link to her Wikipedia page, so you can access them easily.

Some Interesting Facts About Shireen Mirza:

Disclaimer; All images are available on the Shireen Mirza official Instagram Account. Images can be taken from her official Instagram account for educational purposes. Image Credit goes to the respective owners of the Image Creator. We try to gather accurate data but sometimes there might be some mistakes, Kindly let us know if you find mistakes, We would correct them. We do not take any Guarantee/Claim That the information we have gathered is 100% correct.

This is the full details on Shireen Mirza Biography, Age, Height, DOB, Father, Family, Husband, Net Worth & More. Share this post with your friends and keep visiting us on celebwale.com for famous personalities and trending people’s biography with updated details. If you have any thoughts, experiences, or suggestions regarding this post or our website. you can feel free to share your thought with us.