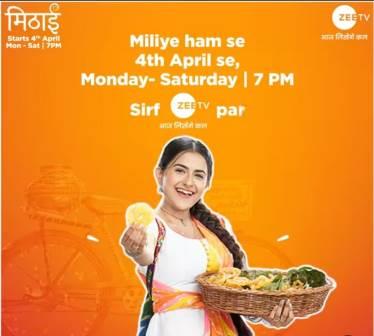 Mithai is an Indian Hindi language television serial that is a Hindi remake of the Bengali serial of the same title. The serial is very popular in the Bengali language, due to which the makers decided that they will also make a Hindi remake of it. Now how much the Hindi audience likes this serial, it will be known only when the time comes.

However, the makers have released the promo of the show in which Debattama Saha, playing the character of Mithai, is feeding sweets to a family. Then Ashish Bharadwaj playing the role of Siddharth comes there and says that I hate eating sweets. From the promo, this serial looks promising, now it has to be seen how much the Hindi audience likes this show.

The serial will be aired on the Zee TV channel from 4th April from Monday to Saturday at 7 pm. Debattama Saha and Ashish Bhardwaj are in lead roles in the serial, which is produced under the banner of Arvind Babbal Production Pvt. Ltd.

This is the full details on Mithai (Zee Tv) Serial Star Cast, Wiki, Timings, Producers, Real Name & More. Share this post with your friends and keep visiting us on celebwale.com for famous personalities and trending people’s biography with updated details. If you have any thoughts, experiences, or suggestions regarding this post or our website. you can feel free to share your thought with us.