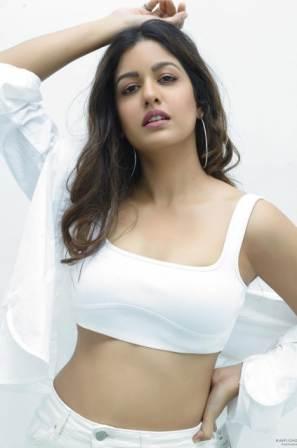 Ishita Dutta is an Indian film and television actress and model best known for starring in the Bollywood film Drishyam. She was born on 26 August 1990 in Jamshedpur, Jharkhand. She completed her early studies at the local school Dakshin Bharat Mahila Samaj (D.B.M.S.) English School. She has completed her graduation in Media Studies. Ishita was fond of acting from the beginning but she wanted to distance herself from acting because of her shy nature.

But her elder sister Tanushree Dutta encouraged him and motivated him to take up acting. Encouraged by Tanushree’s words, Ishita got training in acting from Anupam Kher’s Acting Preparation School. She started her career with the Telugu film Chanakyudu. This film was released in 2012 in which she played the role of Swapna.

In the same year, she worked with her sister Tanushree in the movie Yenidu Manasali but the film could not be released till now due to some reasons. After this, in 2015, she made her debut in the Kannada film industry by playing the role of Swati in the Kannada film Raja Rajendra. She rose to fame playing the character of Anju Salgaonkar in the 2015 Bollywood blockbuster movie Drishyam.

After this, she appeared in the role of Sargi in popular comedian Kapil Sharma’s movie Firangi, released in 2017. Apart from this, she has also appeared in Bollywood movies like Lashtam Pashtam, Setters, and Blank. Talking about Ishita Dutta’s TV career, she started her TV career in 2013 with the role of Poonam Garg in the Star Plus serial Ek Ghar Banaunga. In 2016, she appeared in Life OK’s serial Rishton Ke Saudagar – Baazigar in the lead role of Arundhati Trivedi along with her husband Vatsal Seth.

Ishita was till now seen in serials like Kaun Hai – Ek Naya Adhyay (2018) and Bepanah Pyar (2019). In 2021, she is seen in the lead role of Kajol Mukherjee in the Colors TV serial Thoda Sa Badal Thoda Sa Pani. Ishita Dutta started her career in music videos in 2020. She worked in Times Music’s album Rehne Do Zara in 2020. In the same year, she also appeared in Kithe, a music video for Desi Music Factory.

Ishita Dutta’s age is 30 years old in the year 2022. She is quite passionate about her fitness and really enjoys trying out different things from easy jogging and brisk walking to weights, functional training, and even kickboxing. She takes out time to do meditation even on her busy days. She says about meditation that it is true that yoga is definitely a form of life and it means more than we think.

Yoga takes us inwards and brings the best out of us. Apart from this, she also pays a lot of attention to her food but after marriage, she has become completely vegetarian. She likes to take mostly nutritious things in her diet so that she can stay healthy.

Ishita was born in a prosperous upper-middle-class Bengali Hindu family. His entire family believes in Hinduism and worships Hindu deities. His father’s name is Tapan Dutta who is an ex-employee of Life Insurance Corporation and her mother’s name is Shikha Dutta who is a housewife. Apart from her parents in Ishita’s house, there is also an elder sister named Tanushree Dutta.

Tanushree is a Bollywood actress who is famous for her role in the Bollywood movie Aashiq Banaya Aapne. Ishita’s elder sister Tanushree has encouraged her a lot to enter the entertainment industry. From childhood, Tanushree taught Ishita to do many things from makeup. She called Ishita to Mumbai and got training in acting from Anupam Kher Actor Preparation School.

Talking about Ishita’s marital status, she is married. She married her long-time boyfriend actor Vatsal Sheth very secretly at the ISKCON temple in Juhu, Mumbai. The news of their sudden marriage was shocking to everyone. Ishita and Vatsal worked together in Life OK’s TV serial Rishton Ke Saudagar – Ek Baazigar.

After that, both of them started dating each other. Later Ishita Dutta and Vatsal Sheth tied the knot on 28 November 2017. Till now both of them do not have any children. We Hope Ishita will soon become the mother of a beautiful baby boy and will give good news to her fans.

Talking about Ishita Dutta’s total net worth, her net worth is around ₹2 crores. She is an emerging artist of the Hindi film and television world whose main source of income is from acting in films and serials. Apart from this, she also promotes some brands through her Instagram, for which she charges up to lakhs of rupees.

Ishita Dutta’s account is present on all social media platforms where she uploads her latest photos. She is very active on the social networking site Instagram and keeps sharing her latest pictures here every day. As soon as they are uploaded, their pictures are covered on social media. In this sequence, Ishita has uploaded many selfies on Instagram, which become viral on social media.

She takes a long time to take selfies She wrote a caption on a selfie that she tried 47 times to capture. She is also present on Facebook where she is followed by around 4 million people. Ishita Dutta is also covered by Wikipedia on its page.

Apart from this, she is also present on Twitter where she shares her thoughts through tweets with her 42.2k followers. In the table below, we have shared the links of all their social media platforms with you, by clicking on which you will be able to access their profile page directly.

Some Interesting Fact About Ishita Dutta:

This is the latest information on Ishita Dutta Biography, Wiki, Age, Family, Sister, Husband, Child, Net Worth & More. Share this post with your friends and keep visiting us on celebwale.com for famous personalities and trending people’s biography with updated details. If you have any thoughts, experiences, or suggestions regarding this post or our website. you can feel free to share your thought with us.