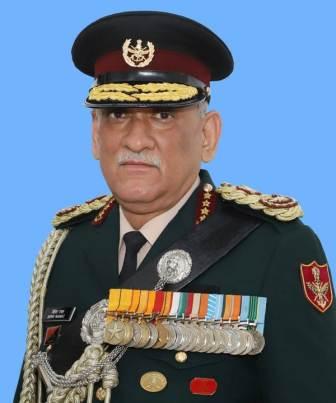 Chief of Defense Staff (CDS) Bipin Rawat was born on 16 March 1958 in Pauri Garhwal district of Uttarakhand. His beginning in the army was sharp. During his long time in the army, General Rawat has been awarded the main honors of the army. General Rawat was commissioned for the first time in the 5th Battalion of the 11th Gorkha Rifles in Mizoram on 16 December 1978. His father was also once a part of this unit.

Talking about his early education, Rawat’s early education took place in Dehradun, Cambrian Hall School, St. Edward’s School in Shimla, and Indian Military Academy in Dehradun. He graduated with B.Sc from the Indian Military Academy. He was awarded the “Sword of Honor” at IMA Dehradun. He also obtained an M Phil degree in Defense and Management Studies from Defence Services Staff College (DSSC), Wellington, and an M Phil degree in Strategic and Defense Studies from Madras University.

Also, he completed his Diploma course in Management and Computer Studies from the University of Madras. Apart from this, General Bipin Rawat was awarded a Ph.D. degree in Military Media Studies in the year 2011 by Chaudhary Charan Singh University.

CDS Bipin Rawat was first appointed as the second lieutenant in the 5th Battalion of the 11 Gorkha Rifles. His father was also once a part of this unit. General Rawat inherited the years-old experience of his father, which was useful in front of him in the war. During his four decades of service, General Rawat served as a Brigade Commander, General Officer Commanding-in-Chief (GOC-C) Southern Command, General Staff Officer Grade 2 in Directorate of Military Operations, Colonel Military Secretary, and Deputy Military Secretary.

He has done as Military Secretary’s Wing in the Junior Command Wing and played the role of Senior Instructor. He has also been part of the United Nations Peacekeeping Force and commanded a multinational brigade in the Democratic Republic of the Congo. In the year 1962, during the war with China, General Rawat, showing bravery, took on the Chinese army in the first confrontation over the standoff on the McMahon Line and bravely held them. As a Major, he commanded a company to maintain peace in disturbed areas like Jammu and Kashmir.

While he was given the responsibility as a colonel, in addition to the Line of Actual Control (LAC) in Kibudhu, commanded the fifth battalion 11 Gorkha Rifles in the Eastern Sector. Rawat became the Chief of the Army Staff before becoming the fourth officer from the Gorkha Brigade to become the COAS. He was instrumental in reducing militancy in the Northeast, with one of the highlights of his career being the 2015 cross-border operation in Myanmar, in which the Indian Army successfully retaliated with an ambush by NSCN-K terrorists.

This mission was carried out under the supervision of Rawat from the Operation Command of the Corps at Dimapur. General Rawat was also part of the plan for the 2016 surgical strike, in which the Indian Army moved across the Line of Control into Pakistan-occupied Kashmir. Rawat was monitoring developments from South Block in New Delhi. General Bipin Rawat took over the command of the Indian Army on 17 December 2016, succeeding General Dalbir Singh Suhag as the 27th Chief of the Army Staff.

General Bipin Rawat’s age was 63 years in the year 2021. He was the first Chief of Defense Staff of India. He was very fond of eating and drinking and used to take the help of yoga to keep himself fit. Bipin Rawat’s height is 5 feet 8 inches, which is equal to 173 centimeters. Rawat’s body weight is about 74 kg, he takes a proper diet to keep his body fit so his body measurement is Not Known. His eye color is Dark Brown, and his hair color is Grey & White.

General Rawat was born in a middle-class Hindu Kshatriya family in Uttarakhand. Bipin Rawat’s father’s name was Late Laxman Singh, a retired lieutenant of the Indian Army. Rawat’s mother’s name is not known. Talking about the marital status of General Rawat, he was married. CDS General Bipin Rawat’s wife’s name was Madhulika Rawat, who was the President of the Army Women Welfare Association (AWWA).

Being the President of the Army Welfare Women’s Association, she used to attend every meeting with General Rawat. She was about to address students at the Defense Service Staff College in Wellington along with her husband Bipin Rawat. But on the way, 11 people including Bipin Rawat and his wife Madhurima Rawat died due to the helicopter crash.

Talking about the total net worth of General Bipin Rawat, his net worth is around ₹1 crore. He was the first Chief of Defense Staff (CDS) of the country, whose salary is ₹250000, which includes many government amenities.

A total of 13 people, including the country’s first Chief of Defense Staff (CDS) General Bipin Rawat, and his wife Madhulika, died on Wednesday. The whole country is saddened by this accident. Indian Air Force’s Mi-17 V5 helicopter crashed near Coonoor in Tamil Nadu’s Nilgiri district on Wednesday, killing India’s first Chief of Defense Staff General Bipin Rawat, his wife, and 11 others on board. Air Force Group Captain Varun Singh survived the accident. He is undergoing treatment in the hospital.

On 8 December 2021, General Rawat had left for Tamil Nadu by a special flight at 9 am today where he reached the Air Force Airbase at Sulur, Tamil Nadu at 11.35 am. From there, General Rawat along with his wife Madhurima Rawat and 12 other soldiers was going to the Defense Service Staff College in Wellington. He was about to address the students in the college but his helicopter crashed midway.

Disclaimer: All images are available on Bipin Rawat’s hashtags on Instagram. Images can be taken from his hashtags Instagram account for educational purposes. Image Credit goes to the respective owners of the Image Creator.

This is the full details on General Bipin Rawat Biography, Age, Height, Father, Family, Wife, Children, Death, Net Worth & More. Share this post with your friends and keep visiting us on celebwale.com for famous personalities and trending people’s biography with updated details. If you have any thoughts, experiences, or suggestions regarding this post or our website. you can feel free to share your thought with us.