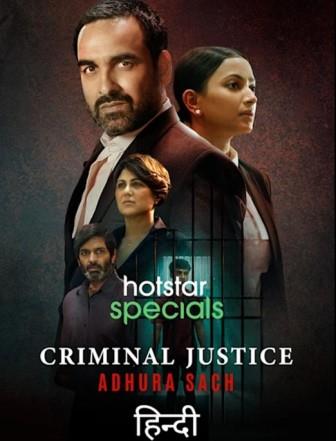 Criminal Justice Season 3 has been released on Hotstar, in which Bollywood actor Pankaj Tripathi is once again seen in the role of Advocate Madhav Singh. The first and second seasons of Criminal Justice received a lot of love from the audience. This time the biggest challenge of this series is that it has to fight itself. Viewers want a tighter storyline and interesting visuals than in the last two seasons and the expectation was too much from this new season. Criminal Justice 3 is officially titled ‘Criminal Justice: Adhura Sach’.

The makers had already released the promo for the third series. The story begins with a noble family. The life of this Ahuja family lives on Zara Ahuja. Because of Zara, her family is rich. Zara is a popular child artist who has a huge fan following. Zara’s mother and father focus on her career and how to keep her daughter alive. On the other hand, Zara’s brother Mukul Ahuja is opposite to her. He is very short-tempered and irritable. The twist in the story comes when one day Zara hides from her parents and goes to a party at night and does not return home.

Later her body was found by the corpse in the sea, whose face is burnt by pouring acid. His brother Mukul is also involved in the same party and Mukul and Zara also get into a fight at the party. Police investigation reveals that in the hotel’s CCTV, Mukul is making Zara sit in his car in an unconscious state. After this, the blame for Zara’s death falls on his brother.

Now it will be interesting to see whether Mukul is responsible for Zara’s death or if is it all a conspiracy by someone else to trap him. So far 5 episodes of the series have been released on Hotstar. Criminal Justice season 3 has a total of 8 episodes and each episode is released every Friday on Hotstar.

This is the latest information on Criminal Justice Season 3 Star Cast, Release Date, Episodes, Story, Wiki & More. Please share this post with your friends and keep visiting us on celebwale.com for famous personalities and trending people’s biography with updated details. If you have any thoughts, experiences, or suggestions regarding this post or our website. you can feel free to share your thought with us.