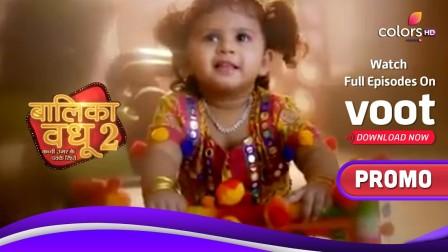 The promo of Balika Vadhu 2 has been released which shows the birth of Anandi. This Anandi will later raise her voice against the evil practice of child marriage and end it.

The makers released the promo of ‘Balika Vadhu 2’ and wrote on the Instagram account of Colors channel, ‘Little little Anandi had to bear the curse of this evil practice of child marriage in her mother’s womb.

A new joy has returned to eradicate this evil practice. In the next part of the promo, it is shown that the family members are eagerly waiting for the birth of the child. Then a person says, ‘O sister-in-law, this time it should be a daughter, otherwise I will not allow her to enter the house.’

Along with this, as soon as the news of the birth of a daughter is received, everyone jumps. But the other family members present there start celebrating because the daughter-in-law of their house has been born.

And thus the child had to bear the curse of the evil practice of child marriage in her mother’s womb. Her marriage was fixed even before she was born.

The second season of the popular serial ‘Balika Vadhu 2’, which aired for the first time 13 years ago, is going to start from 9 August 2021, Monday to Friday at 8:00 PM.

People also liked the story that came out of the luxurious sets made in Mumbai. The serial ‘Balika Vadhu’ was based on the problem of child marriage in the country and it surpassed all other serials in TRP.

Colors, the channel broadcasting this serial, has remembered its most hit serial at a time when it is making all kinds of efforts to become the number one channel. All the actors of the first season of the serial ‘Balika Vadhu’ became famous from house to house.

This is the full details on Balika Vadhu 2 Cast, Colors Tv, Wiki, Cast With Photo, Serial Cast, New Show, Release Date, Telecast Time, Anandi, Promo & More. Share this post with your friends and keep visiting us on celebwale.com for such an entertaining post. If you have any thoughts, experiences, or suggestions regarding this post or our website. you can feel free to share your thought with us.