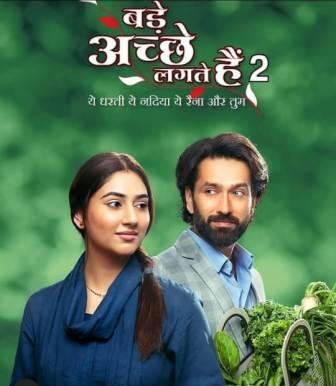 The characters of Ram and Priya played by Ram Kapoor and Sakshi Tanwar will again be seen working their magic on the small screen. This time new actors have been roped in to play Ram and Priya in Bade Achhe Lagte Hain 2.

Ekta Kapoor’s TV show Bade Achhe Lagte Hain 2 is going to start on Monday, August 30. The special thing is that this time Bollywood actor Gajraj Rao has directed the promo of the show.

Every time Ram and Priya get into trouble, their love, trust, and respect for each other grows stronger. Talking about the star cast of the serial Bade Achhe Lagte Hain 2, TV actress Disha Parmar is going to play the role of Priya Sood in the serial.

Apart from him, Nakuul Mehta is playing the role of Ram Kapoor in the serial. In the serial, Reena Agarwal is going to play the role of Disha Parmar’s sautan in the show.

In the serial, Reena is going to be seen as Nakuul Mehta i.e. Ram’s ex-lover. Apart from these, Poorti Arya, Kanupriya Shankar Pandit, Anjum Fakih, Shubhaavi Choksey, Utkarsh Gupta, Ajay Nagrath, Pranav Mishra, and Abhinav Kapoor will be seen in this serial.

This is the full details on Bade Achhe Lagte Hain 2 Star Cast Name With Photo, Serial Cast, Wiki, Promo, Release Date, Start Date, Start Time, Repeat Time Telecast & More. Share this post with your friends and keep visiting us on celebwale.com for such an entertaining post. If you have any thoughts, experiences, or suggestions regarding this post or our website. you can feel free to share your thought with us.