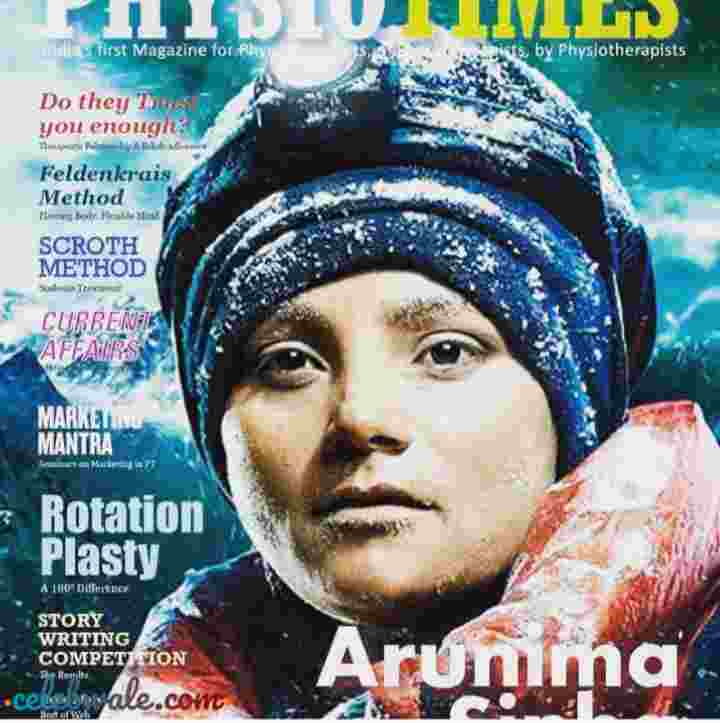 Arunima Sinha was born on 20 July 1988 in the Ambedkar Nagar district of Uttar Pradesh. She is an Indian Mountainer and a Sportswoman. She was very talented from childhood in sports and cycling and wanted to join the paramilitary force. Arunima had also received a call letter from the CISF to the head constable and wanted to join. But they say that no one can change destiny’s writing and perhaps luck had something else approved.

After getting the call letter, she was going from Lucknow to Delhi by Padmavat Express train, but in the middle of the way, an incident happened to her that changed her whole life. What happened to them on that train, we will know further in the part of the train accident. Talking about her sports life, she is a former national-level volleyball and football player.

She is the first Amputee woman in the world who is climbing the seven Mountains. In 2011, a train accident made her disabled, due to which she was admitted to the All India Institute of Medical Science for 4 months. During her treatment, she decided that she would not let her life be ruined like this and show him doing something. In further headlines, we’ll learn about her train accident, her planning and training to climb Mount Everest, and her awards and achievements.

Former national volleyball and footballer Arunima Sinha boarded the Padmavat Express train from Lucknow to Delhi on 11 April 2011 after receiving a call letter from the CISF. A few hours after boarding a general coach on the train, some robbers got onto the train and snatched everyone’s bag, money, and chains. She also wanted Arunima to snatch her bag and gold chain. But Sinha was a brave girl, she did not give up and fought the robbers.

She says that after lying on the side of the railway track when she regained consciousness, she noticed that some rats climbed on her crushed feet and were also biting insects but she was helpless and could not do anything and she could feel that pain throughout the night. She groaned with pain and fainted. Later in the morning, a villager saw him and informed the police that she was taken to the hospital.

At the hospital, the doctor noticed that she had severe pelvic injuries to her leg and the doctors cut his leg to save her life so that her life could be saved. Later, when her case came to the news, she was given a compensation of Rs 25,000 (the US $ 350) by the Sports Ministry. After national outrage, she was compensated by the Minister of State for Youth and Sports, Ajay Maken, in the form of medical relief of an additional Rs 2,00000 (the US $ 2800).

The CISF also assured him of a job on his behalf. Indian Railways also offered him a job in Railways. To give good treatment to Arunima, she was brought to the All India Institute of Medical Sciences on 18 April 2011 for further treatment, where she underwent treatment for 4 months. A private company in Delhi contributed to her treatment by giving him a free prosthetic leg. During the treatment, the police investigated Arunima’s accident on the train.

Arunima Sinha belongs to the state of Uttar Pradesh. She is so young at the age of 33 years, a beautiful volleyball player and world-first amputee mountain climber, with an attractive personality and has a perfectly shaped body.

Sinha is a sportswoman so she follows a strict diet rule to keep herself fit and fine and healthy and to maintain her body figure for sports. Arunima Sinha’s height is 5 feet 2 inches which is 157 cm tall. Sinha has a keen interest to maintain her body, and fitness her weight is 60 kg.

She is very health-conscious she always takes care of her personal body and fitness. She visits the gym regularly, and her figure measurement is not available, and she has attractive and beautiful Black hair and Black eyes.

Talking about the Arunima Sinha family, Arunima Sinha is an Indian mountain climber. She is born into a thriving family. Her father was working as an engineer in the Indian Army, whose name has not yet been known.

Arunima’s mother’s health department was a supervisor whose name was also not known. A year after the accident, Arunima got married in 2012 but her marriage could not last long. After this, they got married on 21 June 2018 in Alambagh, Lucknow.

Arunima Sinha’s husband’s name is Gaurav Singh who is a Paralympian by profession. Her father died when Arunima was 3 years old, after which Arunima’s sister’s husband took responsibility for her family and took care of the family.

Here is a list of some of Arunima’s favorite things in the table below.

Here we give the details of the Arunima Sinha awards and achievements. She was the first amputee female to climb Mount Everest.

There is no information about Arunima Income.

Talk about Arunima Sinha’s Instagram, Facebook, and Twitter accounts, that her official account is present on all three social media platforms, where she keeps sharing her small things or the biggest things with her fans.

She is a mountain climber as well as a social worker. The one who works for the handicapped has also opened a foundation called Arunima Sinha, who writes sports for the disabled and takes up the responsibility of eating and drinking together.

Arunima Sinha has also come on the stage of Kaun Banega Crorepati. Where she won a sum of Rs 25 lakhs for his foundation by answering the right questions. At the KBC Hot Seat, Arunima Sinha and her husband Gaurav Singh were in front of Amitabh Bachchan.

Some Interesting Facts About Arunima Sinha:

This is the full details on Arunima Sinha Biography, Age, Height, Husband, Family, Accident, Achievement & More. Share this post with your friends and keep visiting us on celebwale.com for famous personalities and trending people’s biography with updated details. If you have any thoughts, experiences, or suggestions regarding this post or our website. you can feel free to share your thought with us.