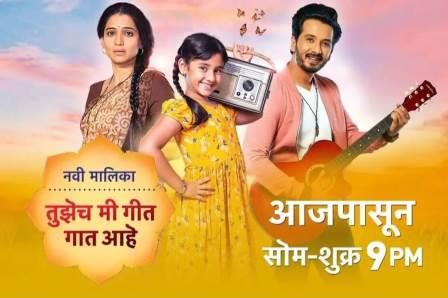 Viewers are looking very excited about this new series of Star Pravah and the promos of the show are also getting a tremendous response from the audience.

Abhijeet Khandkekar is seen in the role of famous singer Malhar in the series and Avni Taywade plays the role of little girl Swara in the show.

This series is a series of the musical journeys of famous singers Malhar and Swara whose entire life is full of music.

Many songs have been used in this series which are also the life of the serial. Produced by Trump Card Studios, the show is going to air from Monday to Friday at 9 PM on the Star Pravah channel from 2nd May 2022.

This is the full details on Tujhech Mi Geet Gaat Aahe (Star Pravah) Tv Show Cast, Timings, Story, Real Name, Wiki & More. Share this post with your friends and keep visiting us on celebwale.com for famous personalities and trending people’s biography with updated details. If you have any thoughts, experiences, or suggestions regarding this post or our website. you can feel free to share your thought with us.