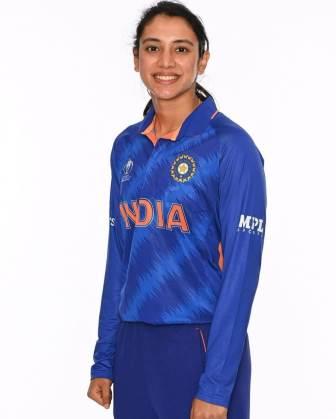 Smriti Mandhana is an Indian female cricketer who is famous all over the world for playing cricket for the Indian team. She is primarily a left-handed batsman who is included in the Indian women’s team as the main batsman. She was born on 18 July 1996 in Mumbai, Maharashtra. When Mandhana was just 2 years old, her family shifted from Mumbai to Sangli in Maharashtra.

She did her early education in Sangli Maharashtra itself. Mandhana comes from a cricketer’s family where his father and elder brother have played district-level cricket for Sangli. She was completely inspired by her elder brother to become a cricketer where she was a part of the Maharashtra state team Under-16. Mandhana also got the full support of her family to make her career in cricket.

Her cricket activities were closely monitored by his family. His father Shriniwas, a chemical distributor, looked at his cricket schedule, her mother Smita was involved in overseeing her diet, clothing as well as other organizational aspects. Apart from this, his elder brother Shravan Mandhana bowls to her sister in the nets.

With the support of his family, her cricketing talent came out and she got selected for the Maharashtra Under-15 team at just 9. She joined the Maharashtra Under-19 team at the age of 11. She first came into the limelight when she scored 224 runs in 150 balls against Gujarat in a domestic one-day cricket match in October 2013, playing for Maharashtra and hitting a double century.

In 2016, she became the second Indian female cricketer after Harmanpreet Kaur to sign a one-year deal with Brisbane Heat in Australia’s Women’s Big Bash League (WBBL). She then joined the Melbourne Renegades in 2017.

In November 2018, she joined the Hobart Hurricane with whom she was associated for 2 years. After that in 2021, she was seen playing for Sydney Thunder. So far, she has played for women’s cricket teams like India Women, Brisbane Heat Women, Sydney Thunder Women, Southern Brave Women, India B Women, Hobart Hurricanes Women, Trailblazers, Western Storm, etc.

Smriti Mandhana’s age is 26 years old in the year 2022. She is a prolific female cricketer who plays cricket for the Indian women’s team. Apart from this, she has a deep love for fitness. Being a sports person, she has to take great care of her fitness so that she can give her 100% in any cricket match. She exercises daily in the gym for hours to stay fit.

Smriti Mandhana’s height in feet is 5 feet 4 inches, which is 163 centimeters. Her body weight is 55 kg and Mandhana’s body measurement is 33-27-33. Her eye color is Black and her hair color is also Black.

Mandhana was born in a middle-class Hindu Marwari family. Her entire family believes in Hinduism and worships Hindu deities. Smriti Mandhana’s father’s name is Shriniwas Mandhana, a former district-level cricketer. Apart from this, he is also a chemical distributor.

Her mother’s name is Smita Mandhana who is a housewife. Apart from her parents, she has an elder brother named Shravan Mandhana. Talking about Smriti’s marital status, she is still unmarried, due to which her husband’s name is not available. There is no news of their affair on the internet.

Talking about the total net worth of Smriti Mandhana, her net worth is around ₹27,000,000. She is a permanent member of the Indian women’s cricket team, from which she is given an annual salary of ₹1 crore by the Board of Control for Cricket in India (BCCI). Apart from this, she gets paid well for her contract in the Women’s Big Bash League (WBBL).

Mandhana also has a cafe named SM 18 in her hometown Sangli which is quite popular. She has tie-ups with many popular brands like Hero Moto Corp, Red Bull, Bata, and Air Optix Plus Hydra-Glide Contact Lenses from which she is reported to charge between ₹40 lakhs to ₹50 lakhs.

Some Interesting Facts About Smriti Mandhana:

This is the full details on Smriti Mandhana Family, Biography, Age, Husband, Height, Cast, Net Worth & More. Share this post with your friends and keep visiting us on celebwale.com for famous personalities and trending people’s biography with updated details. If you have any thoughts, experiences, or suggestions regarding this post or our website. you can feel free to share your thought with us.