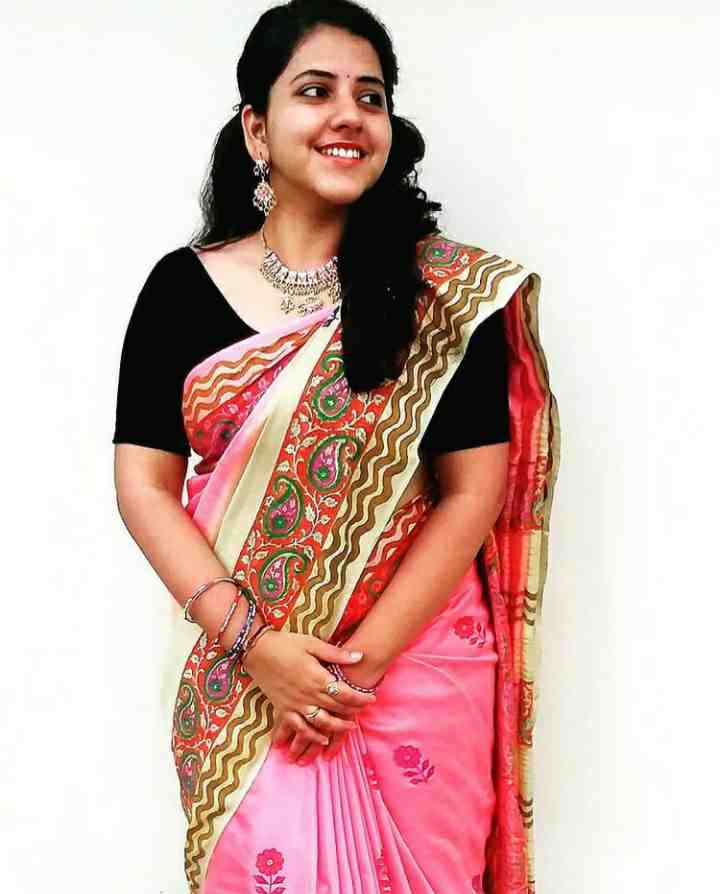 Sireesha Bhagavatula was born in the Machilipatnam village in Visakhapatnam district of Andhra Pradesh in 1996, she belongs to a Tamil Hindu family. After receiving her school education from Sathya Sai Vidya Vihar School, she received her higher secondary school education from Narayan Junior College in the same district.

She holds the position of lecturer in a college. Since childhood, she was interested in singing and was good at singing. Due to her interest in singing, she got training in music and also sang many songs by Smule App. When Sireesha was 10 years old, she performed her first stage.

When his parents saw so much interest in his singing, he supported his daughter and after that, she gave many stage performances. Sireesha has done her B.Tech graduation from Visakhapatnam, after which she also got job offers from MNCs but she turned down all offers from MNCs due to her interest in singing.

Sireesha is a playback singer and Musician from Visakhapatnam in Andhra Pradesh. She first gained popularity when she participated in the famous TV reality show Airtel Super Singer 6. Today she has millions of fans due to her beautiful and sweet voice.

Sireesha has previously participated in a lot of musical reality shows such as OKK Little Star, Zee Sa Re Ga Ma Pa, and Maa TV (Paadlani Vundi in Maa TV). She made her singing debut in AR Rahman Music for the song Mathare (Bigil) – Tamil, Maanini (Whistle) in Telugu.

In Indian Idol 2020, When Sireesha came to Indian Idol, she told that she had participated in a reality show which was being judged by the legendary singer SP Balasubramaniam Ji. Impressed by the singing of Sireesha, SP Bala Subramaniam had expressed a desire to work with him on a song that was also completed.

But the song could not be released because in March 2020 Lockdown has been applied in the entire country due to Covid 19 and after a few days SP Balasubramaniam Ji died in lockdown due to Covid and The release date of the song was postponed.

Now do not know whether that song will ever be released or not and she was very close to SP Bala Ji and she is very sad because of his death. The purpose of coming to Indian Idol is that she can know music better and she can learn well.

Sireesha belongs to the state of Andhra Pradesh. She is just 25 years old, a beautiful singer, with an attractive personality and has a perfectly shaped body. She follows a strict diet rule to keep herself fit and fine and healthy and to maintain her body figure.

She is 165 cm tall, which is 5 feet 5 inches. Sireesha has a keen interest to maintain her body, and fitness her weight is 59 kg. She is very health-conscious she always takes care of her looks and appearance. She has attractive and beautiful Black hair and Black eyes.

Sireesha belongs to a Hindu Telugu family. She was born in a middle-class Hindu Tamil family. Her Father’s name is Murty Satyanarayana and her mother’s name is V.V.Vahi Sundari and in her family, she has a sister named Soujanya Bhagavatula, which is also a singer.

She is a girl who is very passionate about singing. At the age of 25, She is not having an affair with anyone, nor has she had a boyfriend in any previous year.

She is still focusing on her singing so that she can achieve a different position in her singing. She has also participated in Super Singer 6.

Talking about the studies of Sireesha Bhagavtula is still very young and has passed her Secondary level school exam from Sri Satya Sai Vidya Vihar, Visakhapatnam and her college name was Narayana Junior College, Visakhapatnam. She has done her graduation with B.tech from Visakhapatnam, Andhra Pradesh.

Sireesha Bhagavatula did not reveal many favorite things about himself, just so far it has been known that her favorite singer is SP Balasubramanyam who is also her idol and her hobby is singing.

She was a singer from starting her career. So, she was a very famous singer from childhood. Here given some reality shows on the tv where Sireesha Bhagavatula appeared.

Sireesha takes charge of ₹20k/- to ₹30k/- approximately for the one episode of TV Shows. Her total net worth value is around ₹72 lakh as of 2020.

Sireesha Bhagavatula is a singer and she is learning music since childhood. She has a lot of fans on her social media and she has an official account on Instagram on which she has more than 100k followers.

Some Interesting Facts About Sireesha Bhagavatula:

This is the full details on Sireesha Bhagavatula Biography, Age, Height, Family, Father, Husband, Net Worth & More. Share this post with your friends and keep visiting us on celebwale.com for famous personalities and trending people’s biography with updated details. If you have any thoughts, experiences, or suggestions regarding this post or our website. you can feel free to share your thought with us.