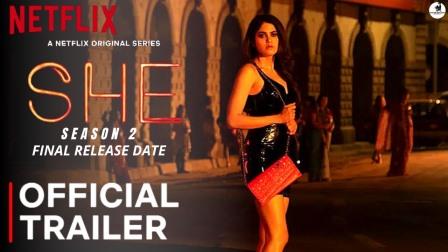 Netflix is ​​going to launch the second season of SHE on 17th June 2022. In the first season, we saw that a girl named Bhumika Pardeshi is posted as a lady constable in Maharashtra Police. She works as an undercover agent to expose the drug mafia.

The ending of the first season of the show raised the curiosity of the audience, with Bhumika revealing her truth to the drug mafia.

Now in this season, it will be interesting to see whether Bhumi will join the gang of drug mafia and support the police or if she is playing some trick to save her life.

The first season of the web series She was launched on Netflix on 20 March 2022 with a total of 7 episodes. Produced by Imtiaz Ali, the series is directed by Arif Ali and Avinash Das.

This is the latest information on SHE Season 2 (Netflix) Cast, Release Date, Timings, Episodes, IMDb, Trailer, Wiki & More. Share this post with your friends and keep visiting us on celebwale.com for famous personalities and trending people’s biography with updated details. If you have any thoughts, experiences, or suggestions regarding this post or our website. you can feel free to share your thought with us.