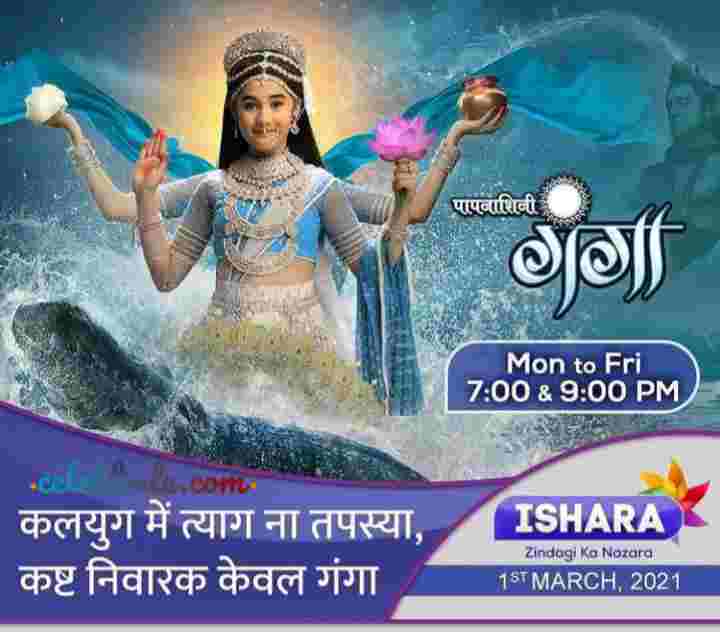 The Ishara channel went live today, ie from 1 March 2021. The show has gone on air with these four programs, including the best mythological show, ‘Paapnaashini Ganga’, romantic thriller ‘Agni-Vayu’ and two drama shows ‘Hamakadam’ and ‘Janani’.

Paapnaashini Ganga is a mythological show with child artist Aakriti Sharma as a young Ganga and Ashi Singh as a Badi Ganga in the lead role. The show will feature the story of Goddess Ganga and her life, which is dedicated to humanity. This new show is produced by Nissar Parvez and Alind Srivastava.

It is telecasted in the new television show Ishara TV. Kailash Kher has given a powerful voice and sung the title track of the mythological tv show Paapnaashini Ganga which will be telecasted from 1st march on the new channel Ishara TV.

Ishara Tv is a Hindi general entertainment channel, offering a wide variety of shows across many zoners, from family drama to love story, mythology to feminist, and more. The channel seeks to create diversified and excellent content that presents a lifestyle scenario through relevant stories.

Based on the ‘Ishara – View of Life’ sentiment, the channel will capture the essence of India’s culture, values ​​, and diverse traditions and celebrate it from a contemporary perspective. Ishara is a venture of IN10 Media Network. IN10 Media Network, led by Aditya Pitti, is focused on creating world-class brands that symbolize quality content.

Star Cast And Their Role In Paapnaashini Ganga tv serial:

As: Mother of Ganga

This is the full details on Paapnaashini Ganga tv Serial Cast, Sab TV New Show, Telecast Time, Episodes & More. Share this post with your friends and keep visiting us on celebwale.com for such an entertaining post. If you have any thoughts, experiences, or suggestions regarding this post or our website. you can feel free to share your thought with us.