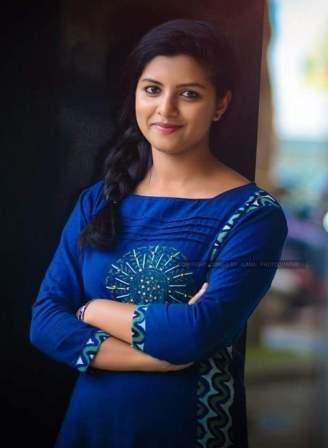 Lijomol Jose is an Indian actress known for working in Malayalam and Tamil film industries. More recently, she was seen in the Tamil film Jai Bhim, in which she did great acting. She was born in 1992 in Idukki, Kerala.

After completing her early studies in Kerala, she joined Amrita School of Arts and Sciences, Kochi, Kerala to complete her graduation. Where she did B.A. in Visual Media. Lijomol did her post-graduation from Pondicherry University while continuing her studies.

She holds a master’s degree in Library and Information Science. Being interested in acting since childhood, Lijomole Jose made a career in the acting industry. Before joining acting, Jose started her career as a staff reporter for Jai Hind TV.

After completing college, she made her debut in the film industry in the year 2016 with the Malayalam film Maheshinte Prathikaaram. In this film, she did tremendous acting in the role of Sonia.

In the same year 2016, she appeared in another Malayalam film Kattappanayile Rithwik Roshan as Kani. The film proved successful at the box office. In her third Malayalam film Honey Bee 2.5, released in 2017, Lijomol played the role of actress Bhavana’s personal make-up artist Kanamani. She has appeared in the film Street Light with famous Malayalam actor Mammootty.

Jose played the character of Ramya in this film. After this, she appeared in some more Malayalam films like Premasoothram and Ottakoru Kaamukan. After making her mark in Malayalam films, Lijomol Jose made her debut in the Tamil industry with the Tamil film Sivappu Manjal Pachai released in 2019.

In 2021 she worked with actor Suriya in Tamil films like Theethum Nandrum and Jai Bhim. Her stellar work in the film Jai Bhim was critically acclaimed. She brilliantly portrayed the suffering of a primitive Irular tribe, the Sengineneni, in this film. For her tremendous acting performance, Lijomol was given the Ananda Vikatan Awards in the category of Best Debut Actress for the film Sivappu Manjal Pachai.

Talking about the Awards and Achievements of Lijomol Jose, she was nominated for the first time at the 2nd IIFA Utsavam Award in the category of Best Performance in a Supporting Role – Female for her role Kanmani in her film Kattappanayile Rithwik Roshan released in 2016.

Lijomol Jose was born into an upper-middle-class Christian family. His entire family believes in Christianity. Lijomol Jose’s father’s name is Rajeev Jose and he is a businessman. Jose’s mother’s name is Lisamma who is a government employee in the Forest Department of Kerala. Apart from his parents in Jose’s house, there is also a younger sister named Liya Jose.

Talking about the total net worth of Lijomol Jose, her net worth is in the range of around ₹1 crore to ₹1.5 crore. She charges around ₹10 lakh to ₹25 lakh for each film.

Lijomol Jose started her movie career with the Malayalam film Maheshinte Prathikaaram released in the year 2016. She played the character of Sonia in this film. Along with this, she acted in Malayalam films like Kattappanayile Rithwik Roshan, Honey Bee 2.5, Street Lights, Premasoothram, and Ottakoru Kaamukan.

Lijomol Jose’s account is present on all social media platforms except Facebook. She keeps sharing personal photos and information about films with her fans on her Instagram account. She has more than 175k followers on Instagram and the number of posts is more than 45. Although she is not so active on her social media.

Wikipedia has also covered Lijomol Jose on its page. Apart from this, she is also present on Twitter where she keeps sharing her thoughts through tweets with her more than 9k followers. In the table below, we have shared the links to all her social media profiles with you, by clicking on them you will be able to access her profile page directly.

Some Interesting Facts About Lijomol Jose:

This is the full details on Lijomol Jose Biography, Age, Father, Family, Marriage, Husband, Religion, Net Worth & More. Share this post with your friends and keep visiting us on celebwale.com for famous personalities and trending people’s biography with updated details. If you have any thoughts, experiences, or suggestions regarding this post or our website. you can feel free to share your thought with us.