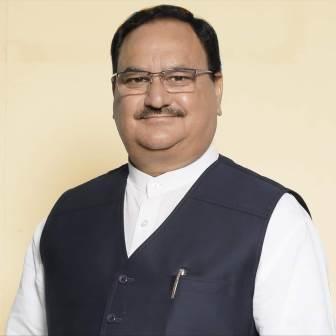 Shri Jagat Prakash Nadda aka JP Nadda is the National President of the Bharatiya Janata Party (BJP) which is currently one of the largest electoral parties in India. Prime Minister Narendra Modi is also a candidate of the Bharatiya Janata Party. Nadda ji was born on 2 December 1960 in Patna, Bihar. He received his early education from St. Xavier’s School in Patna. As a child in school, he represented the state of Bihar in the All India Junior Swimming Championships held in Delhi.

After receiving higher secondary education, he obtained a BA degree in politics from Patna University, Patna. In 1975, he entered student politics for the first time by joining ABVP while studying at Patna University. After that, he jumped into the Sampoorna Kranti movement started by Jai Prakash Narayan during the dark days of the Emergency. In 1977, he contested the Patna University Students’ Union election for the first time as an ABVP candidate, winning which he was elected as the secretary of the University Students’ Union.

After graduating he moved to Himachal where he earned a Bachelor of Laws (LLB) degree from Himachal University. In 1989, when Nadda Ji was just 29 years old, he was entrusted with a big responsibility as the election in charge of the youth wing of the BJP. Just two years later, in 1991, he was made the President of the Bharatiya Janata Yuva Morcha. In 1993, he contested the Bilaspur seat in the Himachal Pradesh Assembly elections as a BJP candidate and won the election. After that, he was re-elected in the Himachal Assembly elections in 1998 and 2007.

He handled important ministries like Forest, Environment, Science, and Technology during his tenure. In 2012, Nadda was elected to the Rajya Sabha and served as a member of the Parliamentary Standing Committee on Transport, Tourism, and Culture. In 2014, he was once again elected to the Rajya Sabha and Prime Minister Narendra Modi made him the Union Health Minister from 2014 to 2019. In 2019 he was appointed as the National Working President of the Bharatiya Janata Party. He was finally elected as the National President of the BJP in 2020.

Belonging to a Brahmin family, Jagat Prakash Nadda was born in a prosperous Hindu Brahmin family. His entire family believes in Hinduism and worships Hindu deities. JP Nadda’s father’s name is Dr. Narayan Lal Nadda and he has also been the ex-vice chancellor of Patna University. His mother’s name was Late Smt. Krishna Nadda. He is the only child of his parents. Nadda Ji’s marital status is married and his wife’s name is Dr. Mallika Nadda. They also have 2 sons named Harish Chandra Nadda and Girish Chandra Nadda.

According to the affidavit given by JP Nadda in the 2018 elections, he has total assets of about ₹3.5 crores. Nadda Ji’s salary is around ₹2.3 lakh per month. They also have vehicles like Toyota Innova (2015) and Hyundai i20 (2014).

Some Interesting Facts About JP Nadda:

This is the full details on JP Nadda (Politician) Biography, Age, Height, Father, Family, Wife, Caste, Net Worth & More. Please share this post with your friends and keep visiting us on celebwale.com for famous personalities and trending people’s biography with updated details. If you have any thoughts, experiences, or suggestions regarding this post or our website. you can feel free to share your thought with us.