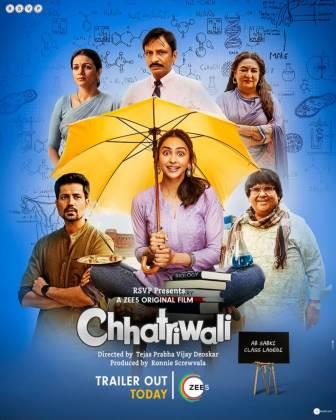 Chhatriwali is a new film of ZEE5, in which Bollywood actress Rakul Preet Singh will be seen in the role of Sanya Dhingra. The film is based on the backdrop of Haryana in which a Chemistry genius girl becomes a condom tester due to unemployment.

Actors like Rajesh Tailang, Prachee Shah Paandya, Rakesh Bedi, and Riva Arora will also be seen in important roles in the film. The film is directed by Tejas Deoskar and produced by Ronnie Screwvala. The film will be released on 20 January 2023 on the OTT platform Zee 5.

This is the latest information on Chhatriwali (Zee5) Movie Cast, Release Date, Wiki, Review, OTT, Story & More. Please share this post with your friends and keep visiting us on celebwale.com for famous personalities and trending people’s biography with updated details. If you have any thoughts, experiences, or suggestions regarding this post or our website. you can feel free to share your thought with us.