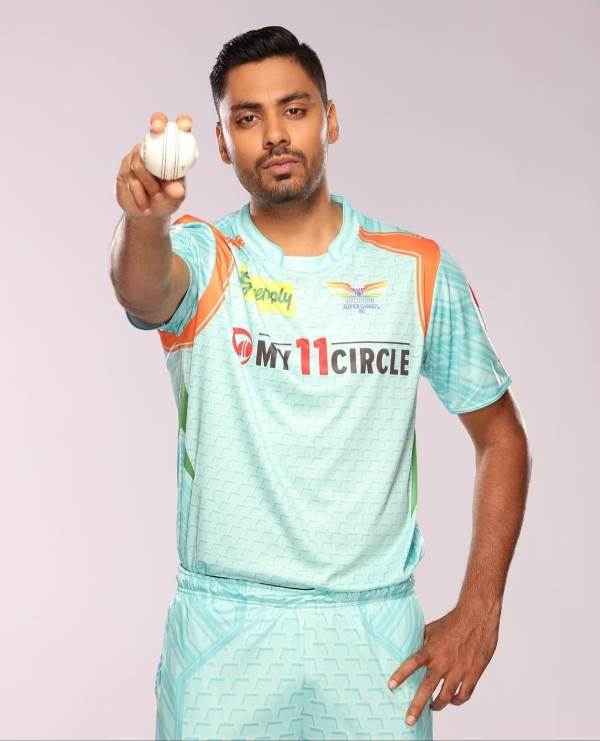 Avesh Khan is an Indian cricketer who has also played T20 matches for India. Avesh is a well-known name in IPL who has impressed everyone with his bowling. He was born on 13 December 1996 in Indore, Madhya Pradesh. He got his early education from the Advanced Academy of Indore. After that completed his B.Com studies at Renaissance College of Commerce and Management, Indore. Avesh wanted to establish himself as a cricketer since childhood.

Initially, his father used to help him in playing cricket, who himself has been a local level cricketer. At the age of 14, he joined Indore Colts Cricket Club and worked hard. Eventually, his hard work paid off and he was selected for the Madhya Pradesh cricket team in the 2014 Ranji Trophy. He made his first-class debut in Delhi against Railways, playing for Madhya Pradesh in the Ranji Trophy. He took 2 wickets in the first innings in his debut match.

He continued his impressive performance for 2 years and in 2017 he was bought by the IPL team Royal Challengers Bangalore for ₹20 lakh and included in his team. He got a chance to play only one match while on the RCB team. In the IPL auction held in 2018, the team Delhi Daredevils was included for ₹70 lakhs. In the 2018 IPL season, Avesh played a total of 6 matches where his performance was fine.

Seeing his impressive performance in the IPL, he was included in the Indian team in the T20 International match against New Zealand. In January 2022, his name was selected for the Indian team in the home series against West Indies. He was involved in India’s ODI and T20 International teams. Avesh got a chance to make his debut in the T20 match against West Indies on 20 February 2022.

After that, he was included in the Indian team in the home T20 series against Sri Lanka. In the IPL 2022 auction, he was bought by the team of Lucknow Super Giants for ₹10 crores. He performed brilliantly for Lucknow in the 2022 IPL season.

Avesh Khan’s age is 25 years old in the year 2022. He is the emerging fast bowler of Team India who has performed brilliantly in IPL matches so far. He is a fit player who works out daily on the cricket ground.

Avesh Khan’s height in feet is 6 feet 1 inch, which is 185 centimeters. His body weight is 74 kg and Avesh’s body measurement is 42-34-14. His eye color is Black and his hair color is also Black.

Avesh was born in a middle-class Muslim family in Indore. His entire family believes in the Muslim religion and also offers prayers for Allah. Avesh Khan’s father’s name is Aashique Khan who has a shop in Indore. His mother’s name is not known. Apart from the parents in his house, there is also a sister whose name is not known. Avesh is still unmarried and there is no news of his affair with anyone.

Avesh Khan’s total net worth is around ₹13 crores. He gets ₹20k per match as a fee for playing domestic matches from the team of Madhya Pradesh. Apart from this, he gets around ₹10 crores as fees every year in IPL.

Some Interesting Facts About Avesh Khan:

Que. How fast is Avesh Khan?

Ans. Avesh Khan is a fast bowler who can bowl consistently at the speed of 145 kmph.

Que. Who is the Avesh Khan family?

Ans. In the Avesh family, his parents and her sister are available.

Ans. In 2022, IPl Mega auction, he was bought by a new IPL Team Lucknow Super Giants at the price of ₹10 crores.

This is the full details on Avesh Khan (Cricketer) Biography, Age, Height, Family, Wife, IPL, Net Worth & More. Share this post with your friends and keep visiting us on celebwale.com for famous personalities and trending people’s biography with updated details. If you have any thoughts, experiences, or suggestions regarding this post or our website. you can feel free to share your thought with us.