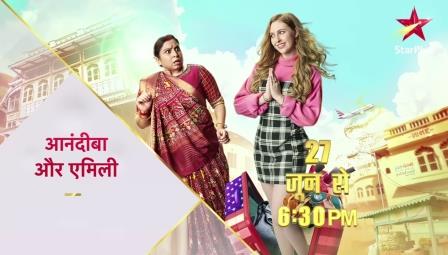 Anandiba and Emily is a new serial airing on Star Plus whose story looks quite interesting. It is shown in the trailer of the show that Anandiba of Gujarat keeps the rituals close to her chest and she wants an Indian cultured daughter-in-law for his son Aarav. On the other hand there is Emily who is American by passport and Indian by heart.

Aarav falls in love with Emily but the twist in the story comes when Emily’s sister-in-law Gunjan does not want to see Emily and Anandiba reunite. Now it will be interesting to see how Emily adapts herself to the Indian traditions.

This is the full details on Anandibaa Aur Emily (Star Plus) Tv Serial, Cast, Release Date, Timings, Promo, Wiki & More. Share this post with your friends and keep visiting us on celebwale.com for famous personalities and trending people’s biography with updated details. If you have any thoughts, experiences, or suggestions regarding this post or our website. you can feel free to share your thought with us.