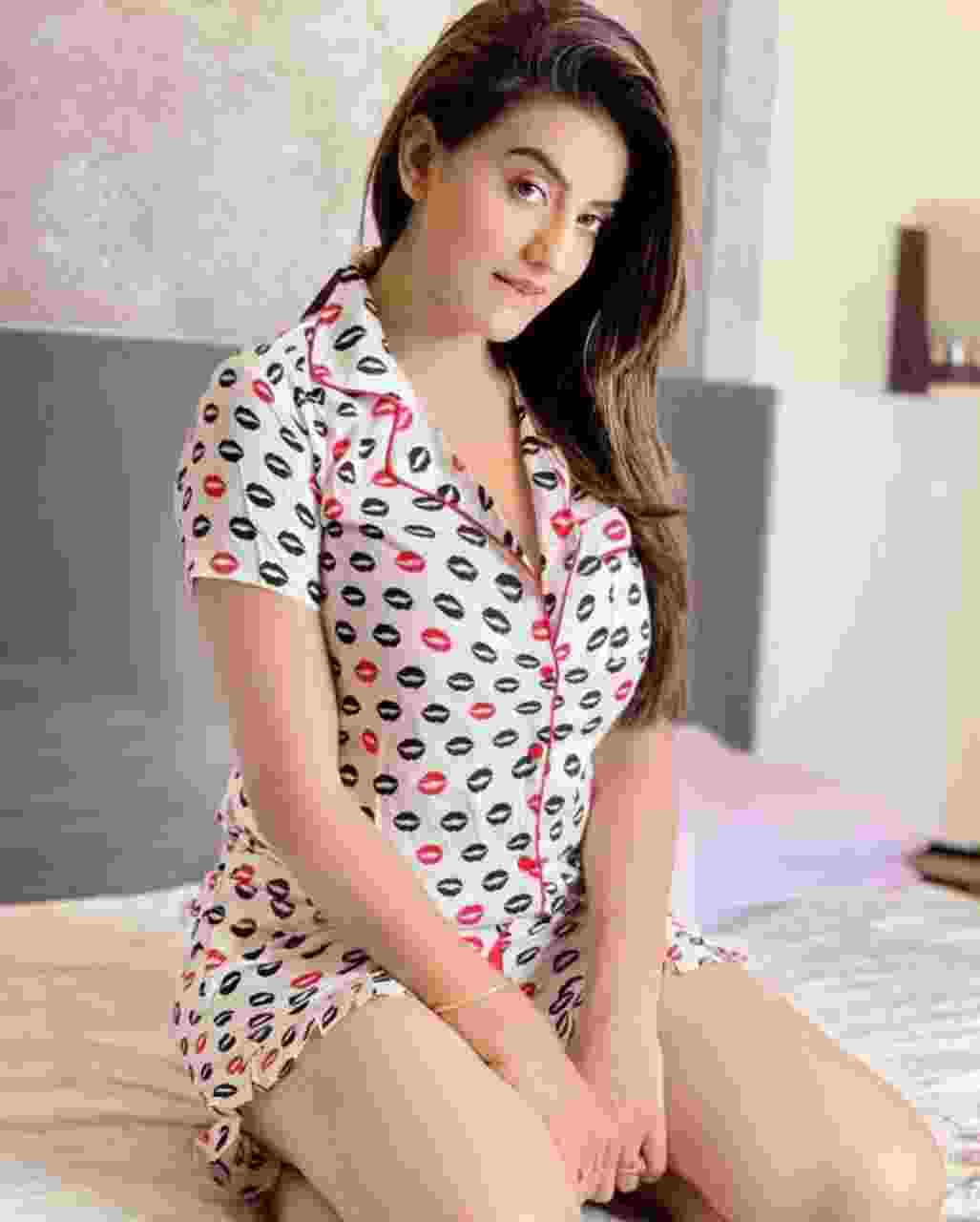 Akshara Singh is a well-known Indian Bhojpuri film actress who is predominantly known for working in Bhojpuri films. Although she is in limelight these days for her performance in Bigg Boss OTT and often keeps trending on Twitter.

Akshara was born on 30 August 1993 in Mumbai, Maharashtra. She was born in a film family whose parents also worked in the Bhojpuri industry as an actor. So it would not be wrong to say that acting is in her blood. Akshara was an expert in dancing and singing along with acting since childhood.

She also received her early education in Mumbai, after which she completed her graduation from Mumbai University. Her family is originally from Patna, Bihar, but due to their work in the industry, their parents settled in Mumbai. Akshara was fond of acting since childhood, which she pursued and started working in theater from childhood.

At the age of 16, she had become proficient in dance and acting. After which she made her debut in the industry with the Bhojpuri film Satyamev Jayate released in the year 2010. The film received a lot of love from the audience and her pairing with Bhojpuri star actor Ravi Kishan was well received, making her an overnight star. With this film, she was in the headlines of Bhojpuri cinema. After her debut film, she signed Saugandh Ganga Maiya, an action drama film in which Akshara’s performance was appreciated.

She is very active in Bhojpuri films and has acted in more than 50 films till now. She has done films with many big Bhojpuri stars like Ravi Kishan, Nirhua, Khesari Lal Yadav, Manoj Tiwari, Pawan Singh. Today Akshara is counted among the big actresses of Bhojpuri cinema, whose beauty has millions of fans. After Monalisa, Sambhavna Seth, and Amrapali Dubey, Akshara Singh is the only name that has helped the Bhojpuri film industry to gain international recognition.

Apart from acting in films, she is also a good singer who has made her special place in the hearts of the audience with many melodious songs. The song is sung by him, which has been seen by millions of people till now. In films, their pairing with Pawan Singh is very much liked, as well as the songs filmed on these pairs are also quite a hit.

Apart from working in Bhojpuri films, she has also tried her luck in the Hindi television industry. She made her Hindi television debut in the year 2015 with the Zee TV serial Kaala Teeka in which she played the character of Madhuri Jha.

After this she appeared as Gulkand Ayodhya Prasad in Zee TV Ek and Seva Wali Bahu, then she appeared in the serial Porus which aired in 2017 as Maharani Kadika. However, she could not get the success she had envisioned in the Hindi television industry.

After this Akshara gave her full attention to her acting and dance in Bhojpuri films, due to which she is making a splash in Bhojpuri cinema today. In the year 2021, she has once again participated as a contestant in the most popular TV show Bigg Boss OTT, which is being broadcast for the first time on the ott platform Voot.

In this show, it is seen giving a tough competition to other contestants with great strength. Bigg Boss is being telecast for the first time on the Voot platform before being aired on TV, which is being hosted by renowned Bollywood director Karan Johar.

Akshara Singh’s age is 28 years in the year 2022. She is a star actress in the Bhojpuri cinema industry whose beauty is loved by millions of people. Her hot figure makes people crazy. To maintain her figure, she does different types of exercises in the gym for hours.

Apart from this, to increase her mind and spiritual power, she wakes up early in the morning and keeps doing yoga. Akshara likes to eat green nutritious dishes to keep her health healthy, apart from this she also consumes fresh fruits.

Akshara has inherited acting due to her parents being associated with the acting industry, due to which she also grew up and started getting attracted towards acting, and today she has achieved fame in the industry with her acting.

Apart from her parents, she also has a younger brother named Keshav Singh in Akshara’s house. Talking about Akshara’s marital status, she is unmarried, due to which her husband’s name is not known.

Talking about her affair, Akshara’s affair has been with Pawan Singh. In an interview, she told that there was a lot of rift with Pawan Singh, after which both of them separated. However, after this, her name was not associated with any actor.

Talking about the total net worth of Akshara Singh, her net worth is around 40 crores. She is a well-known actress in the Bhojpuri cinema industry who has worked in films with star actors like Pawan Singh, Khesari Lal Yadav, Dinesh Lal Yadav Nirahua, and Ravi Kishan.

She charges around 10 lakh to 15 lakh rupees for working in a film. Apart from this, she has also worked in the TV industry but due to lack of desired success, she paid attention to the Bhojpuri industry. She also owns a Toyota Fortuner and Mahindra Scorpio which cost around 35 lakhs and 15 lakhs respectively.

Akshara has also done many stage shows in her career, for which she charges around 3 lakh to 5 lakh rupees every hour. She also has a YouTube channel where she uploads videos of her sung songs on which millions of views come from which she earns in lakhs. These days Akshara remains a part of Bigg Boss OTT.

She has been paid a hefty fee to appear on this show. Let us tell you that Bhojpuri artists like Ravi Kishan, Manoj Tiwari, Khesari Lal Yadav, Dinesh Lal Yadav Nirhua, and Monalisa have also been a part of this show. Today Akshara lives in her flat in Mumbai, which is worth crores. At the same time, her annual income is also in crores.

Bhojpuri cinema’s famous actress Akshara Singh is not interested in any identity today. She has earned a name in Bhojpuri cinema, apart from this she has also worked in Hindi TV serials. She made her acting debut in the Hindi television field with Zee TV C’s serial Kala Teeka, after which she also appeared in Sony TV’s serial Porus, but she did not get much recognition from all this. This year in 2021, once again the most talked about TV show Bigg Boss is seen in OTT, which is being broadcast for the first time on the OTT platform Voot.

Akshara Singh started her film career with Ravi Kishan’s film Satyamev Jayate. Her performance in this film was highly appreciated. As the film proved to be a hit at the box office, she had a line of films.

Today she is known as a star actor in Bhojpuri films. She has worked with all the stars of the industry be it Pawan Singh, Khesari Lal Yadav, Dinesh Lal Yadav Nirhua, or Ravi Kishan. She is one of the beautiful actresses in the Bhojpuri industry and this is the reason why Akshara’s fan following is very much seen in UP Bihar.

She has worked in many superhit Bhojpuri films like Transfer, Dhadkan, Satya, Maa Tujhe Salaam, Saugandh Ganga Maiya Ki, etc. In the table below, we have shared the list of all her films with you, which you must read once.

Apart from being an actress, Akshara is also a great singer. She has given her voice in many music videos till now. She was very fond of singing since childhood. After acting, she also started her successful innings as a singer and now after all this, she has also become a musician.

She had an album titled Bewafa Tere Bin, whose music was composed by him. Apart from this, Akshara has also sung some traditional songs of Chhath which have been well-liked on YouTube. Today millions of views go on the songs sung by him. In the table below, we have shared with you the list of all the songs sung by him, which you must read once.

The pair of Akshara Singh and Pawan Singh is considered to be the top in Bhojpuri cinema. There have also been a lot of discussions about the affair between the two, but hardly you would know that Akshara had also accused Pawan Singh of assault.

There were even reports that Pawan Singh dragged Akshara holding her hair and hit her head against the wall while abusing her in filthy filth. Seeing the growing rift between the two, Akshara decided to separate herself from Pawan Singh.

Akshara’s account is present on all social media platforms where she shares her new pictures with her followers and apart from this she also keeps sharing small clips of songs on social media. She is present on Instagram where Akshara is very active and shares at least 25 to 30 posts a week.

She is also present on Twitter where she is often trending due to her becoming a contestant in Bigg Boss. She has around 13k followers on her Twitter handle. Apart from this, she is also a very beautiful singer whose voice is very melodious and she keeps uploading videos of her sung songs on her YouTube.

In the table below, we have shared with you the links of all her verified social media accounts, by clicking on which you will be able to directly access her profile page.

Some Interesting Fact About Akshara Singh:

Que: How old is Akshara Singh?

Que: Where is Akshara Singh from?

Ans: Akshara Singh is from Mumbai but her childhood mostly spends Patna.

Que: What is the height of Akshara Singh?

This is the full details on Akshara Singh Biography, Wiki, Bigg Boss 2021, Age, Height, Family, Mother, Husband, Marriage, Net Worth & More. Share this post with your friends and keep visiting us on celebwale.com for famous personalities and trending people’s biography with updated details. If you have any thoughts, experiences, or suggestions regarding this post or our website. you can feel free to share your thought with us.