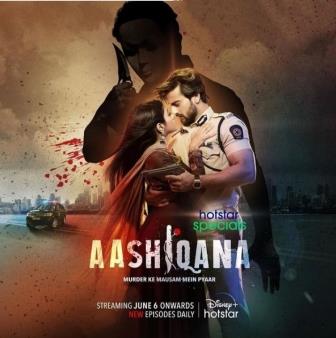 Aashiqana is a new show released on Disney Plus Hotstar. One episode of the show will be released every day on Hotstar. It is a romantic thriller show that will see the story of Love in Laal Rang.

The story of the show revolves around two wounded hearts who are brought closer by fate. Recently the trailer of the show has been released by Disney Plus Hotstar in which the center of the show is a police officer who is on his mission, a passionate girl, and a serial killer.

The theme line of the show is Aashiqana Andaaz Badlega Jab Murder Ke Mausam Me Pyar Barsega. The show is directed by Gul Khan who is a well-known producer of Zee TV.

This is the latest information on Aashiqana Web Series, Hotstar, Cast, Wiki, Release Date, Review, Rating, Story, Trailer, IMDb & More. Share this post with your friends and keep visiting us on celebwale.com for famous personalities and trending people’s biography with updated details. If you have any thoughts, experiences, or suggestions regarding this post or our website. you can feel free to share your thought with us.