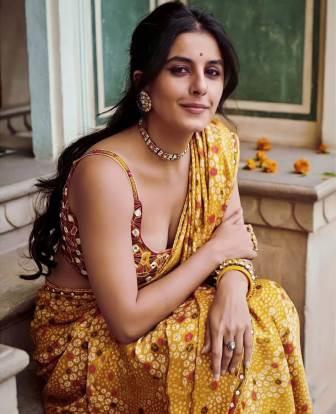 Isha Talwar is an Indian film actress known for working predominantly in South Indian language films and Hindi films. She has worked in many Malayalam, Telugu, and Tamil language films in her career. But she got recognition all over the country for her role as Madhuri Yadav in the Amazon Prime web series Mirzapur Mirzapur 2. Isha was born on 22 December 1987 in Mumbai, Maharashtra. After receiving her early education in Mumbai, she obtained a degree in Economics from St. Xavier’s College.

In 2004, she joined Bollywood choreographer Terence Lewis’s dance school where she learned dance forms like ballet, jazz, hip hop, and salsa. She later joined the same dance studio as a tutor. Isha started her career as a model. She has worked in more than 40 different brand commercials like Pizza Hut, Vivel Fairness Cream, Kaya Skin Clinic, and Dulux Paints while modeling. Before joining films as a lead actor, she played the role of a child actor in the 2000 Bollywood film Hamara Dil Aapke Paas Hai.

She made her debut in the Malayalam industry with the lead role of Ayesha Rehman in the film Thattathin Marayathu released in 2012. She spent about 2 years preparing for this film. She did a language learning course and also takes guitar training. The film proved to be a blockbuster at the box office in which she played the role of a Muslim girl named Ayesha who falls in love with a Hindu boy.

After playing the role of Samantha in the Malayalam film I Love Me released in the same year 2012, she made her debut in the Telugu industry with the role of Shruti in the film Gunde Jaari Gallanthayyinde in 2013. She made her debut in the Tamil industry with the role of Janani in the film Thillu Mullu, which was released in 2013. She has done 9 Malayalam films till now. Her 2 more Malayalam films Theerpu and Nethra are set to release in 2022. Apart from this, she has worked in 2 Tamil films and 3 Telugu films.

Isha made her Bollywood debut with the role of Maya in the 2017 film Tubelight. Her opposite Salman Khan worked in this film and the film earned more than ₹100 crores at the box office. After that, she appeared in various roles in Bollywood movies like Kaalakaandi, Article 15, Kaamyaab, and Sharmaji Namkeen. Apart from films, in 2010 she worked in the Hindi television show Rishtey. She also joined the Malayalam TV show Comedy Stars as a judge in 2014.

She participated in the Malayalam TV show Comedy Super Night 3 as a dancer in 2017. Apart from this, in 2018, she did episodic roles in the Malayalam television series Kasthooriman. Apart from films, and TV shows, Isha Talwar makes an entry into the world of web series. In 2019, after playing the role of Shagun in Dice Media’s web series Home Sweet Office, she engulfed the world of web series.

Isha started her career in web series in 2019. She debuted in the year 2019 in the web series Home Sweet Office. Recently, Isha Talwar acted in the powerful web series Mirzapur season 2. She played the role of the daughter of cm and wife of Munna Bhaiya and the character’s name is Madhuri Yadav.

Isha has won many Film Awards in the category of Best Star Pair- for the movie “Thattathin Marayathu”. Also, she was awarded the Vanitha Film Award, Pearl Movie Award, and SIIMA Award for the category of Best Debut (Female) for the same movie in the year 2013. In the year 2014, she was also Nominated for the South Indian International Movie Award for Best Female Debutant for the movie Gunde Jaari Gallanthayyinde the list goes on…

Isha Talwar’s age is 35 years old in 2023. She is a wonderful actress whose photos keep going viral on social media. Fans of her hot photos and bold look are crazy. She does hard workouts to maintain her figure. She also takes a balanced diet so that her body’s health can be well.

Isha was born into a prosperous Hindu family in Mumbai. His entire family believes in Hinduism and worships Hindu deities. Isha Talwar’s father’s name is Vinod Talwar and he is an executive producer who works under the Bollywood director and producer Boney Kapoor.

Isha’s mother’s name is Suman Talwar and she is a housewife. Apart from his parents, there is also a brother in her house named Vikas Talwar. Isha’s marital status is unmarried and there is no news of her affair or dating on the internet.

Talking about the total net worth of Isha Talwar, her net worth is around ₹16 crores. She lives a luxurious life in Mumbai. She also has luxurious houses and owns expensive vehicles like BMW, and Audi. She charges around ₹1 crore for her role in a film. Apart from this, a major part of her earnings comes from TV commercials. She does TV ads for many brands like Dulux Paint, Wild Stone, Ponds Fairness Cream, Pears Soap, Stayfree, Cadbury Dairy Milk, and Venus Cream, from which she earns in crores.

Isha Talwar’s Instagram photo which was extremely hot and sexy has gone viral. Anyway, she keeps sharing her hot photos with her fans. Her saree traditional look has also been well-liked by the fans. She keeps sharing such photos on her social media accounts, so if you have not followed her, then follow them now.

Some Interesting Facts About Isha Talwar:

Que. Where is Isha Talwar from?

Que. Who is Isha Talwar’s father?

Ans. Isha Talwar father’s is Vinod Talwar and he is an executive producer who works under the Bollywood director and producer Boney Kapoor.

Que. How old is Isha Talwar?

Ans. Yes, she does TV ads for many brands like Dulux Paint, Wild Stone, Ponds Fairness Cream, Pears Soap, Stayfree, Cadbury Dairy Milk, and Venus Cream, from which she earns in crores.

This is the latest information on Isha Talwar Biography, Wiki, Age, Height, Husband, Father, Family, Net Worth & More. Please share this post with your friends and keep visiting us on celebwale.com for famous personalities and trending people’s biography with updated details. If you have any thoughts, experiences, or suggestions regarding this post or our website. you can feel free to share your thought with us.