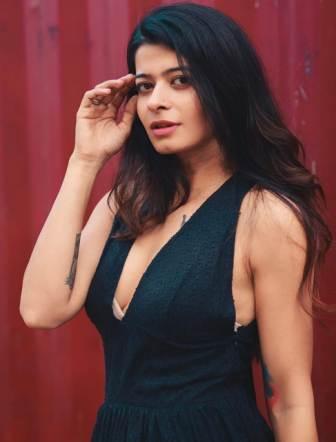 Chandni Srivastava is a popular Indian dancer and choreographer known for her dancing and choreography in Hindi film and television shows. Chandni was born on 2 August 1993 in New Delhi, India. She also got her early education from a private school in New Delhi. Chandni used to take part in extracurricular activities right from her school days. She was trained in the martial art since childhood and has also won medals in martial arts championships in school.

Apart from this, she has been fond of dance from the beginning and was serious about making a career in dance since her college days after which she moved to Los Angeles, USA to learn dance. After taking dance training in Los Angeles, she also performed with international dancers on the stage of World of Dance, Los Angeles in the year 2014. After learning dance in America, Chandni came to Mumbai to make her career in the dance itself.

She first got a chance to play the role of a dance teacher in the opening scene of the Bollywood film The Shaukeen. In the opening scene of this film, she was teaching dance to people as a dance teacher. After this, in 2015, she participated as a contestant in the dance reality show Dance + Chapter 2 of Star Plus. Where her bonding with Gaurav Mankoti was seen well. Their bonding was well-liked by the audience and their pair was included in the top 12 contestants of the show.

Chandni and Gaurav have not only worked in Indian shows but she has also worked in an international show Heartbeats. The chemistry of both between them was very good in the show, after which both of them also created a YouTube channel named gauravNchandni where she uploads her choreographed dance videos which are well-liked by the audience. She has more than 155k subscribers on his YouTube channel.

In the year 2020, she appeared in Disney+ Hotstar’s show Home Dancer. Chandni Srivastava has also been honored with Glocera Navdurga Women Awards for her excellent dance performance and choreography. In the year 2021, she joined Sony TV’s dance reality show India’s Best Dancer Season 2 as a choreographer where she is choreographing IBD contestant Milind Bhatt.

Chandni Srivastava’s age is 29 years old in the year 2023. She is one of the best dancers and choreographers in the Indian entertainment industry who has given dance training to many Bollywood actresses. She is known for her tremendous dance moves. Chandni’s dance moves are quite electrifying which makes the audience swoon. These dance moves of her are also very helpful in keeping her fit.

Apart from this, she does different types of exercises in the gym for hours. Chandni also does yoga and meditation for her peace of mind so that she can remain mentally healthy as well. Dancing is a difficult task that requires a lot of energy and to get this energy, she also takes special care of her food.

She also takes a diet rich in protein for eating green vegetables. Apart from this, she also consumes fresh fruit juices to keep her body healthy. Follows a strict diet rule to maintain her dance performance.

Chandni Srivastava’s height is 5 feet 4 inches, which is 163 cm. Her body weight is 56 kg and Chandni’s body measurement is 32-30-32. Her eye color is Black and her hair color is Black.

Chandni was born into a prosperous Hindu family in New Delhi. Her entire family worships Hindu deities and believes in the Hindu religion. Chandni Srivastava’s father’s name is not known and her mother’s name is also not known. Apart from her mother in his house, there is also an elder brother named Navya Srivastava.

Talking about the total net worth of Chandni Shrivastav, their net worth is from around ₹55 lakh to ₹70 lakh. The main way of earning moonlight is to dance and choreograph in TV and films. Apart from this, many televisions like Tecno Mobile, Oppo Mobile, and Payza App. Chandni also has worked in an advertisement for which she charges up to lakhs of rupees.

Chandni also collaborated with the popular brand Adidas, for which she takes fees up to thousands of rupees. They also have a YouTube channel that has more than 155k subscribers and views on their uploaded videos come in the Million. She earns about ₹1 lakh every month from her YouTube channel.

Apart from this, she is neither present on Facebook nor Twitter. Even Wikipedia has not covered Chandni on its page. In the table below, we have shared the links to all his social media profiles with you, by clicking on them you will be able to access his profile page directly.

Some Interesting Facts About Chandni Srivastava:

This is the full details on Chandni Srivastava (Dancer) Biography, Age, Height, Father, Family, Husband, Boyfriend, Net Worth & More. Please share this post with your friends and keep visiting us on celebwale.com for famous personalities and trending people’s biography with updated details. If you have any thoughts, experiences, or suggestions regarding this post or our website. you can feel free to share your thought with us.