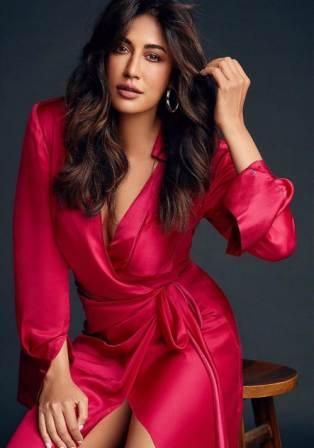 At the time of Chitrangada’s birth, he was posted in Jodhpur, after that, he moved to Bareilly and after a few days of posting in Bareilly, his last posting was in Meerut city of Uttar Pradesh. Chitrangada did her early education at Sophia Girls High School in Meerut. After this, she went to Delhi for her graduation, where she graduated in Home Science from Lady Irwin College, New Delhi.

Since her college days, she wanted to become an air hostess, for which she also applied for the post of an air hostess in various airlines, but her dream remained incomplete due to three consecutive failures. After finishing college, she started her career as a model and also did some modeling projects. During that time she modeled for brands like ICICI Bank and Alukkas Jewellery. She performed in Altaf Raja’s song Tum To Thahere Pardeshi which brought her to the limelight for the first time.

After this, she caught everyone’s attention by working in the music video Sunset Point for the song sung by Gulzar. Chitrangada also worked in the music video Koi Lauta De Woh Pyare Pyare Din. While working on this music video, film director Sudhir Mishra caught sight of him, after which he offered Chitrangada a role in his film Hazaaron Khwaishein Aisi. Taking advantage of this opportunity, she made her debut in the Bollywood industry with the Bollywood film Hazaaron Khwaishein Aisi, released in the year 2003.

Her role in the film was appreciated by the critics and the audience. After this film, she acted in another Bollywood film Kal: Yesterday and Tomorrow in the same year 2005. In this film, she played the lead role of Bhavna Dayal. After this, Chitrangada took a break from films between 2005 to 2008 and returned to the big screen after about 3 years in 2008. She made a comeback on the big screen with the Bollywood film Sorry Bhai, but the film failed at the box office.

In the year 2011, she played the role of Preeti in the Bollywood film Yeh Saali Zindagi, while in the same year released Akshay Kumar and John Abraham starrer film Desi Boyz, she played the role of economics teacher Tanya Sharma. Despite having such a big star in the film, it could not do any wonders at the box office and was average. Although the film was a musical hit, the songs of which were liked by the audience. She has acted in many films and has also done item numbers in some films.

Some of the popular movies of Chitrangada are Desi Boyz, Anjaan, Gabbar Is Back, Munna Michael, and Baazaar. Despite her long career, Chitrangada could not achieve the fame she deserves in acting. After working in films, she also tried her hand in film production and produced the film Soorma released in the year 2018. Now she is going to be seen in the lead role in the crime mystery thriller film Bob Biswas in the year 2021. Abhishek Bachchan will also be seen in the lead role with him in this film.

Chitrangada Singh’s age is 45 years old in the year 2021. She is one of the hottest actresses of Bollywood who has made a different image in Bollywood with her fitness. She is 45 years old but everything from her skin to figure is toned. Chitrangada was not always like this. She used to be very overweight in childhood but, she worked hard on her body for her bold look. Chitrangada’s workout plan and diet are the secrets of her beauty. She keeps a close watch on her workout and diet plan.

However, his way of exercising is quite different from other Bollywood celebrities. Chitrangada says about herself, “I enjoy working out a lot, but exercise does not suit me. She does her workouts with full dedication. When she is at home, she spends one and a half hours four days a week. Talking about her exercises, she starts her workout with cardio-based exercises. She does this exercise for about 40 minutes. In cardio exercises, she does exercises like running on a treadmill, cross trainer, and cycling. Then she does weight training exercises.

Her weight training exercises include step-ups, squats, and lunges weighing up to 10 kg, leg presses, leg extensions, and 75 kg leg curls. Also, she does 10 to 15 minutes of jogging. Her routine includes playing golf and swimming every few days. Jogging activities help her maintain a perfect figure. Apart from this, she takes 7 to 8 hours of sleep for her fit body. Take plenty of sleep and drink at least 8 glasses of water a day.

Chitrangada Singh’s height is 5 feet 3 inches, which is 160 cm. Her bodyweight is 55 kg and Chitrangada’s body measurement is 35-26-34. Her eye color is Dark Brown and her hair color is Black.

Chitrangada Singh was born in a prosperous Sikh family. His entire family believes in Sikhism. She belonged to an army family. Chitrangada’s father Niranjan Singh is a retired army officer and her mother Satyavati is a homemaker. Apart from her parents, there is also a brother and sister in Chitrangada’s house. Chitrangada Singh’s brother’s name is Digvijay Singh and he is a golfer.

Chitrangada’s sister’s name is Tina Singh. Talking about her marital status, she is married. Chitrangada’s husband’s name is Jyoti Singh Randhawa and he is also a popular golf player. Chitrangada and Jyoti Randhawa met when she was in class 8th and Randhawa was a student of class 12th at that time.

Both of their fathers were in the same regiment in the army, due to which Chitrangada and Jyoti also studied in the same school. After a few years both the families shifted to Delhi and Chitrangada started dating Randhawa. The two dated each other for about 5 years before tying the knot in the year 2001. After this, Chitrangada also became the mother of a son, whose name both of them lovingly named Zoravar Randhawa.

However, due to misunderstandings, they got divorced in the year 2014, after which Chitrangada got custody of their son Zoravar. Now Chitrangada’s son Zoravar lives with her mother. However, the reason for the divorce between Singh and Randhawa is said to be Chitrangada’s relationship with film director Sudhir Mishra. But later the news of his rumor was proved to be rubbish.

Talking about the total net worth of Chitrangada Singh, her net worth is around ₹25 crores. Apart from this, she also has a luxurious house in Andheri, Mumbai. She charges up to ₹1 crore for her role in a film. Apart from this, Chitrangada has many SUV cars, in which she is also the owner of a luxury car like BMW X5. Apart from this, she also endorses brands like Airtel, Parachute, Puma, Borges Olive Oil, Garnier, Aliva Crackers, Taj Mahal Tea, and Joyalukkas Jewellers and is also a brand ambassador. She also endorses Tata Group’s Tanishq and Titan Eye Plus for which she charges lakhs or crores of rupees.

Chitrangada was given the Bollywood Movie Award in the category of Best Female Debut in 2006 for her debut movie Hazaaron Khwaishein Aisi. Apart from this, she was also honored with the FICCI Young Women Achiever Award in the year 2009.

Chitrangada as an actress:

Chitrangada as a Producer:

Despite her long career, Chitrangada could not achieve the fame she deserves in acting. After working in films, she also tried her hand in film production and produced the film Soorma released in the year 2018.

Chitrangada Singh’s name has also been linked to controversies. Her alleged love affair with director Sudhir Mishra is said to be one of the reasons for her divorce from Jyoti Randhawa. Apart from this, in the year 2016, she had accused the director of the film Babumoshai Bandookbaaz of misbehaving on the sets. The actress got hurt by this and left the film. Chitrangada had said that she was asked by the director to do obscene scenes.

Chitrangada has also been covered by Wikipedia on its page. She is also very active on Twitter where she keeps on tweeting social issues through tweets with her 1 million followers. In the table below, we have shared the links of all his social media profiles with you, by clicking on which you will be able to access his profile page directly.

Some Interesting Fact About Chitrangada Singh:

This is the full details on Chitrangada Singh Biography, Wiki, Age, Mother, Family, Husband, Son, Net Worth & More. Share this post with your friends and keep visiting us on celebwale.com for famous personalities and trending people’s biography with updated details. If you have any thoughts, experiences, or suggestions regarding this post or our website. you can feel free to share your thought with us.